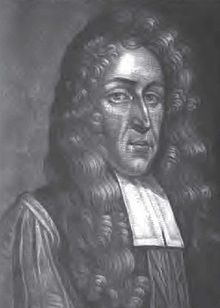 Blessed Richard Langhorne (c. 1624 – 14 July 1679) was a barrister executed as part of the Popish Plot. He was admitted to the Inner Temple in May 1647 and called to the bar in November 1654. He provided legal and financial advice for the Jesuits.
His wife, Dorothy, was a Protestant from Havering in Essex. His sons Charles and Francis were both priests. When, in October 1677, Titus Oates was expelled from the English College at St Omer "for serious moral lapses", Charles Langhorne entrusted Oates with a letter to his father. Oates returned to St Omer with a letter from Richard thanking the Jesuits for all they had done for his sons.
When Oates and Israel Tonge unleashed their Popish Plot in September 1678, three Jesuits and a Benedictine were arrested. Langhorne was arrested a week later, imprisoned at Newgate and charged with Treason. Oates claimed, corroborated by William Bedloe, that Langhorne's earlier correspondence dealt with treason.
He was found guilty of High Treason. As the result of a petition by his wife, a ‘true Protestant’, he received a month's reprieve to tidy the affairs of his clients. He was executed at Tyburn, London, on 14 July 1679. According to the Benedictines at Tyburn Convent, "He declared on the scaffold at Tyburn, that not only a pardon, but many preferments and estates had been offered to him if he would for sake his religion. As the hangman was placing the rope round his neck, he took it into his hands and kissed it."

This notice from The Tablet archives has this additional detail about his execution from a contemporary account:

"He then said, 'Pray God bless his Majesty and this kingdom, and defend him from all his enemies '; and then prayed that there might be no more blood shed, and that God would forgive them that designed or rejoyced in his death, and suddenly added, 'I shall say no more in publick.' And presently applyed himself to his private devotions, and by some words which he spake lowder than ordinary it appeared that some of his prayers were in Latin and some in English. One near him saying, the Lord have mercy on his soul,' he, turning to him, said, I thank you for your charity.' Having continued about a quarter of an hour in his private ejaculations (though the sheriff told him he might take half an hour if he pleased), he asked whether the rope were right. A while after he said, You need stay no longer for me.' Upon which the cart was immediately drawn away, and the hangman, having struck him on the breast and pull'd his legs to dispatch him, he was stripp'd, and being quite dead, was cut down and the sentence executed upon him. . . .

"After his bowels were burnt and his body quartered according to his sentence, his corps was, by his Majesty's most gracious order, delivered to his friends, who put it into a hearse, with escutcheons about it, and was afterwards interred in the Temple church, in which place he was once a student of the laws."

On 15 December 1929, he was beatified by Pope Pius XI.
As I've noted before on this blog when discussing the Popish Plot, England's justice system benefited the accuser and gave little leeway to a defendant trying to prove a negative: Langhorne could not prove their interpretation of his letters was wrong. Samuel Pepys and other defendants finally received some measure of justice because Judge Scrogg figured out Oates' and his confreres' perjury. Samuel Pepys was accused that same year of giving naval secrets to the French and of being a Catholic, just because of his loyalty to James, the Duke of York. He spent six months in the Tower of London and eventually established, not his innocence per se, but his accuser's guilt. Pepys was cleared of charges and reinstated as Secretary to the Admirality--in 1684!

Blessed Richard Langhorne, pray for us!
Posted by Stephanie A. Mann at 12:30 AM