The College of Arms and Mary I 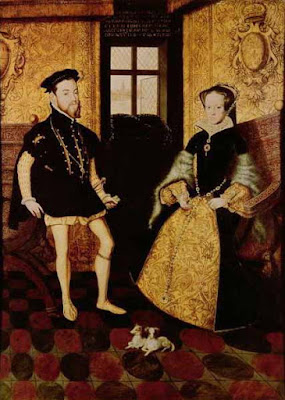 The College of Arms still holds its charter from Mary I of England (and Philip of Spain, her consort). It was granted on July 18, 1554 and according to this 1805 history of the College and its Heralds, it was an uncomfortable situation:

The College of Arms found a benefactress in Mary, though it must Mary I. have been painful to her to have had them proclaim her rivals When the council of Edward VI. could no longer keep the secret that he was dead, July 10, four days after his decease, his loss was promulgated in London, at the same time that it was declared, that the late Monarch had made a settlement of the Crown in favor of Lady Jane Grey. This was done by two heralds, and a trumpet blowing before them, first in Cheapside, then in Fleet-street, none opposing it but a young man, a vintner's apprentice, who alone spoke for Mary's "true right and title, for which he was immediately taken up, and the next day at eight o'clock in the morning, set on the pillory, and both his ears cut off, an herald present, and trumpet blowing, and incontinent he was taken down, and carried to the "Counter." We find that the herald was in his coat, and read the pretended offence of the unfortunate youth in the presence of William Gerrard, one of the sheriffs of London. When Norfolk, and other counties, had shewn their disapprobation of changing the order of succession, the Lord-Mayor and his brethren met the council at Baynard's Castle, where they all agreed to ride to Cheap, attended with the heralds, and proclaims the Lady Mary's Grace ; " but so " great was the concourse of people, that the lords could not ride by them' to the Cross, where was Master Garter, king at arms, in his rich coat of arms, with a trumpet ready. The trumpet was sounded, and then they proclaimed the Lady Mary, daughter to King Henry VIII. and " Queen Katherine, Queen of England, France, and Ireland, Defender of the Faith, &c.; which proclamation ended, the Lord-Mayor and all "the council rode to Paul's Church, where the canticle of Te Deum was sung". This put an end to all further attempts in London to establish Lady Jane upon the Throne.

The apology which the College would offer, could be no other, than that they had been under compulsion to do as the Duke of Northumberland and the council commanded: afterwards they had done as duty and inclination dictated. Mary accepted the excuse with some exceptions. She appeared so satisfied, that Thomas, Duke of Norfolk, having represented, as Earl Marshal, the intentions of the late King in favor of the heralds, of granting them Derby-house, she gave them a charter, dated at Hampton-court, July 18, 1554 (sic), of that mansion, to "enable them to assemble together, and consult, and agree amongst themselves, for the " good of their faculty, and that the records and rolls might be more safely and conveniently deposited."

According to the website for the College of Heralds, their functions have changed since the days of tournaments and jousting knights:

Although many of the ceremonial duties of heralds have disappeared they still carry out and organize under the Earl Marshal, certain extremely ancient and splendid ceremonies. In June each year at Windsor Castle is held the procession and service of the Sovereign and Knights Companion of the Order of the Garter. The State Opening of Parliament, usually in November, is another magnificent ceremony. The Earl Marshal, the Duke of Norfolk, is one of the two Great Officers of State and the office is hereditary in his family. He has particular powers of supervision over the heralds and the College of Arms.

The arrangement of State funerals and the monarch's Coronation in Westminster Abbey fall under the jurisdiction of the Earl Marshal, and the heralds have a role in their organization.

At all these ceremonies the heralds wear their highly distinctive medieval uniform, the tabard. This is a coat embroidered on its front, back and sleeves with the Royal Arms.

And the same page concludes with reference to this date, when Mary and Philip granted the charter:

The Duke of Norfolk, currently Edward William Fitzalan-Howard, the 18th, is the Earl Marshal and in charge of the College of Arms and thus in charge of heraldry in England and Wales, approving each coat of arms granted, including this one for the Duke and Duchess of Cambridge. The Norfolks are, of course, one of the old recusant families, remaining Catholic throughout the centuries.
Posted by Stephanie A. Mann at 12:30 AM

Email ThisBlogThis!Share to TwitterShare to FacebookShare to Pinterest
Labels: Coats of Arms, College of Arms, Duke of Norfolk, Earl Marshal, Philip of Spain, Queen Mary I