A Wedding of England & Spain: Philip and Mary 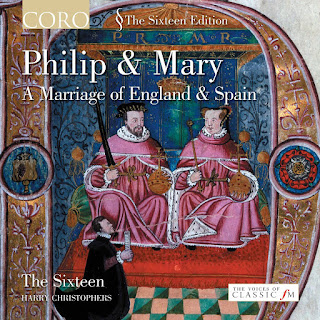 On July 25, 1554, Mary of England and Philip of Spain were married in Winchester Cathedral; their nuptials were witnessed by Stephen Gardiner, the Archbishop of Winchester and Mary's Chancellor. Author Conor Byrne offers some details about the celebration of "A Marriage of England & Spain":

. . .the queen was attired magnificently in 'rich apparel', including a golden robe and a gown of rich tissue embroidered upon purple satin (purple being the colour of royalty) set with pearls and lined with purple taffeta, and a kirtle of white satin embroidered with silver. Mary was accompanied by loyal members of the nobility. Her soon-to-be husband was also splendidly attired in gold. The earl of Derby carried the sword of state before her, while her train was borne by the marquess of Winchester. Notable attendees included the bishops of Winchester, London, Ely, Durham, Chichester and Lincoln.

The wedding was attended by vast numbers of observers, who 'gave a great shout' of joy upon witnessing their sovereign's marriage. The queen's absence of close male relatives meant that she was given away by the marquess of Winchester and the earls of Derby, Bedford and Pembroke. Following a nuptial mass, Philip and Mary proceeded to the bishop's palace under the canopy of state. The couple spent several joyous days in Winchester following their summer wedding. They then departed for Windsor and then to London, in order for the capital's inhabitants to welcome their queen and new king.

Harry Christophers and The Sixteen made a recording of music that might have been performed at the first Christmas Mary and Philip celebrated together, when Mary and her physicians thought she might be pregnant. It includes music by both Spanish and English composers--most especially, Thomas Tallis Puer natus est Mass. The cover image is from the National Archives, Kew.
Posted by Stephanie A. Mann at 1:00 AM