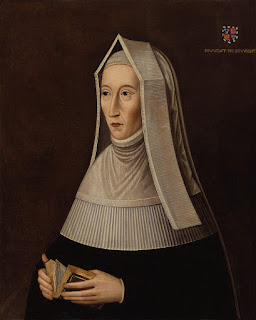 The day after Henry VIII turned 18 and achieved his majority, his grandmother and regent died on June 29, 1509. I think it's safe to say that Margaret Beaufort would have been shocked by the religious changes and violence her grandson would bring to England less than 30 years later, especially the execution of her confessor, Bishop John Fisher, not to mention the suppression of the religious orders she supported. According to History Today:

She was a firm adherent of the established religious forms: spiritual sister and participator in the benefits of prayers and masses at the great Benedictine houses of Durham, Westminster, Crowland and Thorney, and benefactress of the conventual Franciscans and Dominicans. She was also the friend of the Carthusians and Friars Observant who were active in encouraging the growth of personal devotion to Christ among the laity. Margaret was conscious of the need to develop her own spirituality and at the same time to communicate to society around her the richness of the Church's traditional devotion and worship, especially in the sacrament of communion. She translated from French to English the fourth book of the Imitation of Christ, which centres on the need for taking this sacrament frequently and for sincere penitence.  . . . [emphasis added: all these would be destroyed, and of course the Carthusians and Observant Franciscans would suffer greatly]

Michael Jones emphasizes that Beaufort worked with Bishop John Fisher to improve the quality of Catholic preaching and teaching:

Fisher and Margaret both saw clearly the communication problem faced by the Church of their day. They sought the answer not only in a clergy better grounded in theology, but in one familiar with the methods and duties of preaching. At Margaret's behest Wynkyn de Worde printed Fisher's own sermons on the penitential psalms, originally preached by him before her, and shortly before her death she commissioned the publication of his sermon at the funeral of Henry VII. Doubtless with Fisher's advice she embarked on the foundation of a university preachership at Cambridge in 1504. The preacher was obliged to leave Cambridge periodically during the year to preach at named churches, mostly in areas where Margaret had estates. The preachership was also supported by Westminister Abbey, but it was envisaged that the post might be held with a college fellowship, which guaranteed an added source of income.

Her tomb is in Westminster Abbey.
Posted by Stephanie A. Mann at 12:30 AM