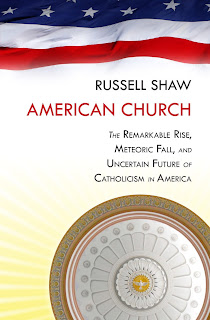 According to the publisher, Ignatius Press:

Has the Americanization of American Catholics--their cultural assimilation, that is--been a blessing or a curse for the Church in the United States? Or has it been a bit of both?

In American Church Russell Shaw takes a searching look at that question and reaches a disturbing conclusion. Cultural assimilation, which was ardently championed by churchmen like the great Cardinal James Gibbons of Baltimore around the turn of the last century, has undoubtedly conferred many benefits on Catholics. Their absorption into the secular culture of America, however, now threatens the Catholic identity of millions of faithful and of their institutions, such as schools, universities, and hospitals.

Shaw does not offer this conclusion as an unsupported generalization. American Church is a richly documented analysis of a process extending over two centuries. Colorful characters and dramatic incidents abound, including the nineteenth-century intellectual feud between Orestes Brownson and the Transcendentalist convert to Catholicism Isaac Hecker, Pope Leo XIII's condemnation of Americanism, the anti-Catholicism that greeted the presidential campaigns of Al Smith and John F. Kennedy, and the numerous intra-Church conflicts that have divided American Catholics since the Second Vatican Council.

In concluding his study, Shaw offers a number of thought-provoking suggestions about what the Church in America needs to do now in the face of an ongoing decline that is sapping its strength and may threaten its very survival.

Russell Shaw is a widely published author and journalist who has written twenty previous books, including To Hunt, To Shoot, To Entertain: Clericalism and the Catholic Laity and Nothing to Hide: Secrecy, Communication, and Communion in the Catholic Church. For 18 years, Shaw directed media relations for the National Conference of Catholic Bishops and the United States Catholic Conference. From 1987 to 1997 he oversaw media relations for the Knights of Columbus. Since resigning from that position, he has worked full time as a freelance writer.

American Church: The Remarkable Rise, Meteoric Fall, and Uncertain Future of Catholicism in America surveys recent history as a personal memoir, analyses the efforts of late nineteenth and early twentieth century Church leaders to chart a path for Catholics in America, and provides some ideas to strengthen Catholic culture in America, ideas which build on movements and efforts already in place. The first several pages of this book presented some confusion as evidently Ignatius Press had changed the title of the book sometime after the text was printed and bound. The original title was "The Gibbons Legacy" and therefore the Foreword by Archbishop Chaput and the Introduction kept mentioning that title. I see that the Kindle edition on amazon.com has cleared up that confusion but it was off putting for a time as I read the paperback edition, which I purchased..

(This is an interesting note for the present and future production of books--the printed and electronic editions can be different: it's much easier to address changes and even corrections in the electronic version. Which one is the official version? Does the Library of Congress decide?)

I presume Ignatius and Shaw changed the title because of concern no one knows who "Gibbons" was--James Cardinal Gibbons, the ninth Archbishop of Baltimore (from 1877 to 1921). Shaw's book comes at a time when others are writing about the renewal of Catholic culture in the U.S., including George Weigel and Ryan N. S. Topping. I have not read those books, so I cannot compare them, but Shaw's book traces the path of assimilation of Catholics in American culture--and as that culture became more and more secularized, then Catholics on that path became more and more secularized. Then he addresses, often from personal experiences, the effects of the implementation of the "spirit of Vatican II", changes in Catholic higher education, reform movements in the episcopacy--and he uses his personal recollections well, without falling into the trap of becoming anecdotal.

On the other hand, I did not think another thread Shaw weaves through the narrative was that effective: he uses the story of The Cardinal, a 1950 novel by Henry Morton Robinson, usually thought to be based on the life of Cardinal Spellman, the Archbishop of New York, as an example of trends and issues in the Catholic Church in America in the early twentienth century. Shaw uses scenes from The Cardinal to exemplify certain changes and events--if you are interested, TCM will be showing the movie based on the novel this summer.

Overall, the story Shaw tells is sad--how the Church lost its influence on American culture because it tried to assimilate too much into American culture. Shaw's hope for the restoration of that influence is in the development of a Catholic subculture, which I think exists--EWTN, Catholic bloggers, the Fellowship of Catholic Scholars, the youthful pro-life movement--and I think will remain small. Primarily, I think Shaw is correct that it is the formation of the laity, as inspired by the documents of the Second Vatican Council that is most important--instead of pursuing "ministries" inside the Church, we should be working to influence our culture--exactly through the sub-culture Shaw outlines. Perhaps the institutional Church should not aspire to the great influence of former days as it may come at the same cost of assimilation or accomodation. Thought-provoking, to say the least.
Posted by Stephanie A. Mann at 12:30 AM