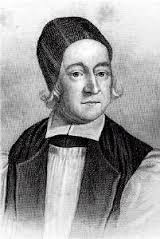 Along with the other bishops and the Archbishop of Canterbury, he was arrested by James II and placed the Tower of London and charged with rebellion and sedition. At their trial, the bishops were acquitted; a real blow to James's plans. Yet, Ken had sworn an oath to James as the rightful king and he did not accept the parliamentary arrangements that brought James' son-in-law and "ungrateful" daughter to the throne.
According to this site,

He was born in 1637 and reared by his half-sister Anne and her husband the well-known angler Izaak Walton. He became a clergyman and served for a year at the Hague as chaplain to Mary, Princess of England and Queen of Holland, niece of King Charles II of England and wife of the Dutch King William of Orange. During this year he publicly rebuked King William for his treatment of his wife the said Mary, which may be why he was chaplain there for only a year. Upon his return to England, he was made Royal Chaplain to King Charles. The King had a mistress, Nell Gwyn, and for his convenience wished to lodge her in his chaplain's residence. Thomas sent the King a sharp refusal, saying that it was not suitable that the Royal Chaplain should double as the Royal Pimp. Charles admired his honesty and bluntness, and when the bishopric of Bath and Wells became available soon after, he declared, "None shall have it but that little man who refused lodging to poor Nellie!" Ken was accordingly made a bishop. When Charles was on his deathbed, it was Ken whom he asked to be with him and prepare him for death.

(Nevertheless he was asked to leave the room and some point when Charles II was received into the Catholic Church, according to reports.)

Under the next king, James II, brother of Charles, matters were different. James converted to Roman Catholicism, the religion of his mother, and political turmoil followed. James issued a decree known as the Declaration of Indulgence, which decreed that various public offices formerly open only to Anglicans, should thereafter be open to all persons. It was feared that the King would appoint large numbers of Roman Catholics to positions of power, and eventually transfer to them the control of the government. When the King commanded the bishops to proclaim the Declaration of Indulgence, seven of them refused to do so and were by the King's command imprisoned in the Tower of London. The people of London rioted, and the bishops were freed and carried in triumph through the streets of the city. Soon after, Parliament offered the crown to the King's daughter Mary and her husband William of Orange and James fled into exile.

William and Mary naturally began their reign by demanding oaths of allegiance from all persons holding public positions, including the bishops. Thomas Ken and others (known as the Non-Jurors -- the older meaning of "juror" is "one who takes an oath," hence "perjurer" as "one who swears falsely") refused to take the oath, on the grounds that they had sworn allegiance to James, and could not during his lifetime swear allegiance to another monarch without making such oaths a mockery. They were accordingly put out of office.


Today, he is best known for several hymns that he wrote, such as those beginning:

All praise to thee, who safe hast kept
and hast refreshed me while I slept!
Grant, Lord, when I from death shall wake,
I may of endless life partake.

Praise God, from Whom all blessings flow.
Praise Him, all creatures here below.
Praise Him above, ye heavenly host.
Praise Father, Son, and Holy Ghost.
Posted by Stephanie A. Mann at 12:30 AM