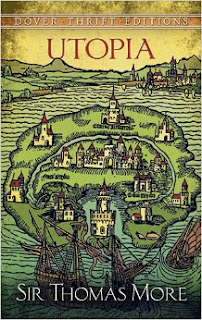 December 2016 will mark the 500th anniversary of the publication of Thomas More's Utopia. In History Today, Joanne Paul writes about the place of Utopia in More's reputation as a statesman:

It may be time, however, to reassess the place of More’s Utopia in this litany of his shortcomings. This year we have an opportunity to do so, as it marks the quincentenary of the publication of Utopia in Louvain in December 1516.

Guy suggests that More’s imaginary country is ‘totalitarian par excellence’, citing its lack of pubs, brothels and ‘secret meeting place[s]’, as well as the mandate against discussion of public policy outside of the popular assembly. This totalitarianism, Guy suggests, lies at the heart of More’s later attitude towards heretics and suggests that his ‘repressive discipline’ against them was similar to the ‘totalitarianism of Utopia’.

Describing Utopia as totalitarian (a 20th-century term) paves over what More was attempting to do in his text, which was to remind his readers of the importance of community. For More, the prioritisation of self-interest had the effect of tearing apart the bonds that ought to unite people. To use examples from Utopia: land-owners who enclosed common land for sheep-grazing, or greedy kings who overstretched themselves in their conquest of new lands both tore apart the unity of the commonwealth. The island of Utopia becomes the inverse of such tendencies. Homes are allocated to families for only a decade at a time, there are no locked doors and no personal possessions.

Rather than totalitarian, Utopia is fundamentally republican. Like property, political power is shared, reflecting More’s belief that authority resides in the body of the people. Within Utopia’s cities, households elect representatives who, in turn, elect both the councillors and their prince. Council and prince together make decisions in regular consultation with the people. The country as a whole is ruled by a general council, the members of which are, once again, elected directly by the people. Thus, although discussing public matters outside the public forum is punishable by death, for fear of the division and distortion of public opinion, the people are directly involved in every political decision made on the island.

More lived in a kingdom ruled by a monarch and he served that monarch while also representing the people as a member of Parliament. He wanted his prince, Henry VIII, to make decisions for the kingdom in consultation with Parliament, and therefore he defended Parliament's right to free speech in debating the king's policies and voting on the funding of the same. The Center for Thomas More Studies offers many tools for the interpretation of Utopia here.
Posted by Stephanie A. Mann at 12:30 AM