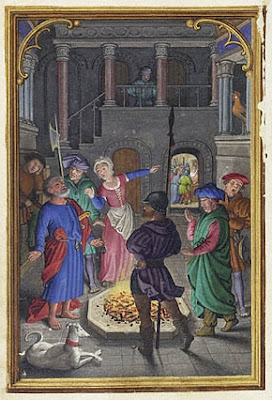 And can we find any where such calmness and simplicity as marked His devotion and His obedience? When does He ever speak with fervour or vehemence? Or, if there be one or two words of His in His mysterious agony and death, characterized by an energy which we do not comprehend, and which sinners must silently adore, still how conspicuous and undeniable is His composure in the general tenour of His words and conduct! Consider the prayer He gave us; and this is the more to the purpose, for the very reason that He has given it as a model for our worship. How plain and unadorned is it! How few are the words of it! How grave and solemn the petitions! What an entire absence of tumult and feverish emotion! Surely our own feelings tell us, it could not be otherwise. To suppose it otherwise were an irreverence towards Him.—At another time when He is said to have "rejoiced in spirit," His thanksgiving is marked with the same undisturbed tranquility. "I thank Thee, O Father, Lord of heaven and earth, that Thou hast hid these things from the wise and prudent, and hast revealed them unto babes. Even so, Father, for so it seemed good in Thy sight."—Again, think of His prayer in the garden. He then was in distress of mind beyond our understanding. Something there was, we know not what, which weighed heavy upon Him. He prayed He might be spared the extreme bitterness of His trial. Yet how subdued and how concise is His petition! "Abba, Father, all things are possible unto Thee: take away this cup from Me; nevertheless, not what I will, but what Thou wilt." [Luke x. 21. Mark xiv. 36.] And this is but one instance, though a chief one, of that deep tranquility of mind, which is conspicuous throughout the solemn history of the Atonement. Read the thirteenth chapter of St. John, in which He is described as washing His disciples' feet, Peter's in particular. Reflect upon His serious words addressed at several times to Judas who betrayed Him; and His conduct when seized by His enemies, when brought before Pilate, and lastly, when suffering on the cross. When does He set us an example of passionate devotion, of enthusiastic wishes, or of intemperate words?

Such is the lesson our Saviour's conduct teaches us. Now let me remind you how diligently we are taught the same by our own Church. Christ gave us a prayer to guide us in praying to the Father; and upon this model our own Liturgy is strictly formed. You will look in vain in the Prayer Book for long or vehement Prayers; for it is only upon occasions that agitation of mind is right, but there is ever a call upon us for seriousness, gravity, simplicity, deliberate trust, deep-seated humility. Many persons, doubtless, think the Church prayers, for this very reason, cold and formal. They do not discern their high perfection, and they think they could easily write better prayers. When such opinions are advanced, it is quite sufficient to turn our thoughts to our Saviour's precept and example. It cannot be denied that those who thus speak, ought to consider our Lord's prayer defective; and sometimes they are profane enough to think so, and to confess they think so. But I pass this by. Granting for argument's sake His precepts were intentionally defective, as delivered before the Holy Ghost descended, yet what will they say to His example? Can even the fullest light of the Gospel revealed after His resurrection, bring us His followers into the remotest resemblance to our Blessed Lord's holiness? yet how calm was He, who was perfect man, in His own obedience!

To conclude:—Let us take warning from St. Peter's fall. Let us not promise much; let us not talk much of ourselves; let us not be high-minded, nor encourage ourselves in impetuous bold language in religion. Let us take warning, too, from that fickle multitude who cried, first Hosanna, then Crucify. A miracle startled them into a sudden adoration of their Saviour;—its effect upon them soon died away. And thus the especial mercies of God sometimes excite us for a season. We feel Christ speaking to us through our consciences and hearts; and we fancy He is assuring us we are His true servants, when He is but calling on us to receive Him. Let us not be content with saying "Lord, Lord," without "doing the thing which He says." The husbandman's son who said, "I go, sir," yet went not to the vineyard, gained nothing by his fair words. One secret act of self-denial, one sacrifice of inclination to duty, is worth all the mere good thoughts, warm feelings, passionate prayers, in which idle people indulge themselves. It will give us more comfort on our deathbed to reflect on one deed of self-denying mercy, purity, or humility, than to recollect the shedding of many tears, and the recurrence of frequent transports, and much spiritual exultation. These latter feelings come and go; they may or may not accompany hearty obedience; they are never tests of it; but good actions are the fruits of faith, and assure us that we are Christ's; they comfort us as an evidence of the Spirit working in us. By them we shall be judged at the last day; and though they have no worth in themselves, by reason of that infection of sin which gives its character to every thing we do, yet they will be accepted for His sake, who bore the agony in the garden, and suffered as a sinner on the cross.

From the Parochial and Plain Sermon, "Religious Emotion".
Posted by Stephanie A. Mann at 12:30 AM