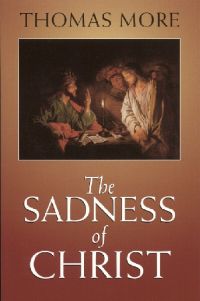 Mary (nee Roper) Bassett died on March 20, 1572, She was St. Thomas More's grand-daughter, Margaret More Roper's youngest daughter. She followed in her mother's footsteps as a scholar and translator. It's very appropriate to remember her today on this Palm Sunday as we enter the Holy Week of Passiontide, because she translated and edited her grandfather's last Tower Work: De Tristitia de Christi. She titled her edition Of the sorowe, werinesse, feare, and prayer of Christ before hys taking. Scepter Publishers offers a modern translation.

Her mother sought the best education possible for Mary, trying to convince Roger Ascham to leave the University of Cambridge and be her tutor. Mary was married twice, first to Stephen Clarke and then to James Bassett, whose stepfather was Arthur, Viscount Lisle, Henry VIII's deputy at Calais:

Educated in France and under Gardiner, with a mother who was called by Foxe ‘an utter enemy to God’s honour’, and a stepfather under suspicion of papistry, it is no surprise that Bassett grew up an enthusiastic follower of the old faith. He remained steadfast to Gardiner on the bishop’s imprisonment in 1547 and worked hard for his release, even petitioning Parliament to that effect. In 1551 the bishop named Bassett one of his proctors at his trial, where he took a considerable part in the examinations. Bassett was himself imprisoned for a short time in October 1551 and on his release went to Flanders ‘because he would the better preserve himself not to be intangled with the schism’.

On Mary’s accession Bassett returned from his self-imposed exile: Gardiner, now lord chancellor, welcomed him back, retained his services, and named him for minor appointments in the Queen’s Household and later in King Philip’s. Bassett enjoyed the trust of Mary and her consort, and on two occasions he was sent to Brussels with important despatches for Philip, who granted him a pension of 1300 crowns and gave presents to his wife at their wedding and to their son at his christening; in gratitude Bassett called his elder son Philip. Bassett was also a friend of Edward Courtenay, Earl of Devon. On the earl’s departure from England he became one of his trustees, and regularly corresponded with him until his death at Padua in September 1556. As an intimate of the King and Queen, he advised Courtenay on his behaviour towards them and mediated in his favour. . . .

Bassett’s marriage to Mary Roper drew him into the circle of friends and kinsmen of Sir Thomas More. Like most of her relations she was a learned lady, ‘very well experted in the Latin and Greek tongues’, who had translated Eusebius’ Ecclesiastical History, as well as other works of the early Fathers. Rastell’s edition of More’s English works, published in 1557, included her translation of her grandfather’s Treatise on the Passion. [which was written in English--this should refer to the "Sadness of Christ"] Bassett himself, despite the vicissitudes of his early education, was a fluent linguist, and a contemporary considered him endowed with ‘all spiritual and bodily gifts’, so they were probably well-matched.

The marriage was short-lived, however. Bassett was only just over 30 when he made his will on 6 Sept. 1558. He bequeathed his ‘dear and well-beloved wife’ jewels, half his goods, his house in Chelsea and a life interest in his lands. He left small gifts to three of his sisters, lamenting that his ‘ability’ was ‘now but small’, and that if his debts had not been so great he would ‘better have remembered them’. To his unborn child (Charles) he left the lease of his house near the Savoy. Except for £20 to the Black Friars of Smithfield and provision for his servants, he ordered the residue of his goods, together with the wardship of his nephew and all his leases in Devon, to be sold to pay his debts. He appointed his father-in-law, William Rastell and Ralph Cholmley as his executors, and his nephew James Courtenay (his fellow-knight in November 1554) and the dean of St. Paul’s as overseers. Bassett died on 21 Nov. 1558 and was buried five days later at Blackfriars, Smithfield, hardly living to see the new reign which could have brought for him only renewed exile or imprisonment, as it did for his two sons.

According to the Wikipedia entry for James Bassett, Philip and Charles, like the rest of the More-Roper extended family, indeed suffered for their faith:

Her other great translation is of Eusebius's History of the Church, a most challenging project described here.
Posted by Stephanie A. Mann at 12:30 AM