Music for Royalty at a Commoner's House 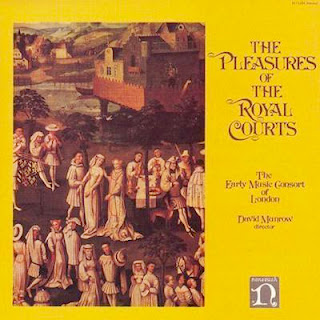 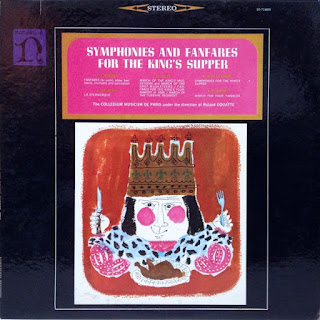 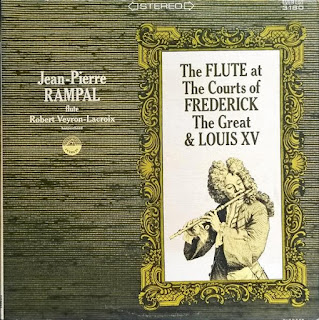 My husband and I visited several royal courts Thursday night: in France, including Provence and Burgundy, Italy, Spain, Germany, Prussia. I suppose we spent the most time at Versailles, listening to works by Mouret, Couperin, Lully, de Lalande, Philidor, Naudot, Chedeville, and de Boismortier!

We had visited Spektrum Muzik in Wichita's Delano shopping district and bought several Nonesuch, Turnabout, and Everest classical music recordings from the mid-1960s to late 1970s. The first two LPs pictured above were in great shape; perhaps the previous owners had made reel-to-reel recordings the first time and never played the LPs again; the fidelity was great throughout. The fidelity and sound quality on the Rampal flute sonatas record was not as good: my husband gave it a C. Rampal played all the flute parts on the album, using sound-on-sound recording techniques when the composition was for two or more flutes.

The liner notes for the Symphonies And Fanfares For The King's Supper were quite eloquently written by Edward Tatnall Canby, as he explained some aspects of courtly life during the reign of King Louis XIV, the role of music at the Court, and the expanding appreciation of this French music. Music does not have to ponderous and heavy with meaning as the nineteenth century thought, he concluded. We can even enjoy marches played on drums without fear of war and conflict! The David Munrow/Christopher Hogwood Early Music Consort album was varied, with many vocal selections sung by countertenor James Bowman but the second side was pretty short, even by LP standards (21:17). All three LPs had brilliant and comprehensive liner notes, providing composer biographies, historical context, and musical exposition.

We have three more to listen to: Mozart's piano concertos (15 and 11); Handel's oboe and string orchestra concertos, and some Monteverdi Madrigals, one Turnabout and two Nonesuch records. My favorite record cover? The Handel, with the composer at the keyboard: 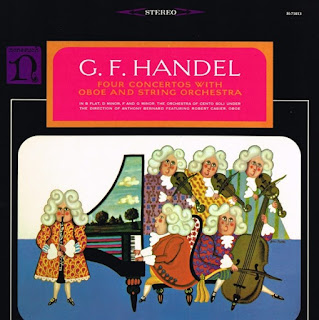 It reminds me of the history essay Richard Lederer gathered from teachers: "Bach was the most famous composer in the world, and so was Handel. Handel was half German, half Italian and half English. He was very large."