Some Fiery Preaching on Easter Sunday--and a Fiery Result 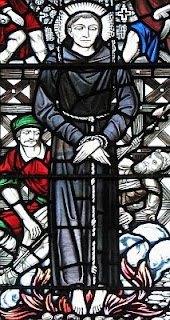 From the Anne Boleyn Files blog:

Instead of focusing on the Easter story and Christ’s resurrection, Peto, who supported Catherine of Aragon, spoke on 1 Kings 22, in which Micaiah shares his prophecies with King Ahab, but Ahab ignores them and imprisons Micaiah. Ahab then died from wounds inflicted during the battle:

“So the King died and was brought to Samaria, and they buried him there. They washed the chariot at a pool in Samaria (where the prostitutes bathed), and the dogs licked up his blood, as the word of the Lord had declared.”

Peto compared Henry VIII to Ahab, drawing comparisons between Anne Boleyn and Jezebel, Ahab’s wife, who had replaced God’s prophets with pagan priests, as Anne was promoting men of the New Religion. Peto concluded by warning the King that if he carried on the way he was, he would end up like Ahab, and dogs would lick up his blood, too. Peto wanted to set Henry VIII on the right path. He wanted him to abandon Anne Boleyn, with her heretical views, and return to Catherine of Aragon. Henry, however, believed his marriage to Catherine to be invalid, and tried to persuade Peto of that.

Father Peto was an Observant Franciscan and served as the provincial of the Greenwich Franciscans. There was a backlash, of course, as British History Online reports:

The king dissembled his ill-will, but on the provincial's departure for a chapter, he caused one of his chaplains, Dr. Curwen, to preach in the friars' church, contrary to the custom of the convent and the will of the warden. The chaplain's sermon roused the warden, Henry Elston, to expostulate; in the king's presence he gave the chaplain the lie. Henry was very angry, and bade the provincial on his return depose the warden. This he refused to do, and the king had them both arrested (fn. 32) Elston was confined at the Grey Friars of Bedford, (fn. 33) but some months later he and Peto were at Antwerp carrying on the campaign against the king. (fn. 34) . . .

And then Henry VIII and Cromwell pressed the Observant Franciscans to swear an oath "to acknowledge the king as supreme head of the church and repudiate the pope's authority" and they refused:

On 15 June the visitors tried to induce the Greenwich friars to adopt the same procedure, ' specially to the intent that if the discreets should refuse to consent, it were better after our minds to strain a few than a multitude.' The friars, however, ' stiffly affirmed that where the matter concerned particularly every one of their souls, they would answer particularly every man for himself.' After further discussion, the visitors were compelled to examine each friar separately, and each refused to accept the articles, especially that which denied the papal authority. In answer to all the arguments of the visitors they declared that ' they had professed St. Francis' religion, and in the observance thereof they would live and die.' (fn. 51)

On 17 June two cart-loads of friars drove through London to the Tower, (fn. 52) and it is possible that some of the Greenwich Observants were among them. On or before 11 August the friars were expelled from their convent (fn. 53)(though they seem to have made some kind of submission (fn. 54) ) and distributed in different places, generally in houses of the Grey Friars, where, wrote Chapuys to Charles V, 'they were locked up in chains and treated worse than they could be in prison.' (fn. 55) Some, such as John Forest, were actually in prison in London. (fn. 56) Two of them, inclosed in a poor lodging at the Grey Friars, Stamford, and treated as prisoners, were ' in meetly good case as the world at this time requireth,' and sent to London for their little belongings, including a new Psalter, a pair of socks, a penner and inkhorn. (fn. 57) But the severity of their treatment is shown by the fact that out of 140 Observant Friars thirty-one soon died, (fn. 58) and this does not account for all the deaths. Thomas Bourchier, who was a member of the Greenwich friary in the reign of Mary, gives details of several martyrdoms which probably belong to this time, though the writer assigns them to 1537. (fn. 59) On 19 July Anthony Brdrbe, formerly of Magdalen College, Oxford, a distinguished scholar, who had been imprisoned and tortured to such an extent that ' for twenty-five days he could not turn in bed or lift his hands to his mouth,' was strangled with his own cord. (fn. 60) On 27 July Thomas Cortt, who had been imprisoned for a sermon against the king in the church of St. Lawrence, London, died in Newgate. (fn. 61) On 3 August Thomas Belchiam, a young priest, who had composed a book against the king, one copy of which he left in the hands of his brethren at Greenwich, died of starvation in Newgate. (fn. 62) No mention of these three friars occurs in extant contemporary authorities, but Bourchier's account representing the tradition of the Order is probably substantially correct, though the names may be misspelt.

Of course, the ultimate response to the Observant Franciscans' refusal to accept the King's Supremacy was the execution of Blessed John Forest. He was burned alive on gibbet for heresy. You may find more about Father William Peto in the Catholic Encyclopedia.
Posted by Stephanie A. Mann at 1:00 AM