Chesterton to the Neophytes

In the diocese of Wichita, Kansas last night, perhaps 327 adults joined the Catholic Church at the Easter Vigil. At least that's how many Candidates (who had already been baptized) and Catechumens or Elect (who have never been baptized) participated in the Rite of Election this year, according to The Catholic Advance, our diocesan newspaper.

I know at least two of those who became Catholics last night and I know that G.K. Chesterton played a great role in one of them deciding to become Catholic. 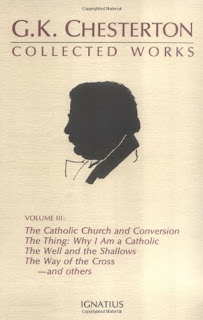 Chesterton thought often about his "conversion" to Catholicism from the Church of England and he wrote about it often, publishing at least four separate works on why he converted:

The Catholic Church and Conversion
Why I Am A Catholic
"Why I am a Catholic" essay in The Thing: Why I Am A Catholic
In The Well and the Shallows, essays on
MY SIX CONVERSIONS
I. THE RELIGION OF FOSSILS
II. WHEN THE WORLD TURNED BACK
III. THE SURRENDER UPON SEX
IV. THE PRAYER-BOOK PROBLEM
V. THE COLLAPSE OF MATERIALISM
VI. THE CASE OF SPAIN
VII. THE WELL AND THE SHALLOWS

Our G.K. Chesterton group has been reading those various essays which Ignatius Press has collected in one volume--and are just about to finish the last three essays, which will combine with reading chapters from The Woman Who Was Chesterton starting in April.

Perhaps these two paragraphs from the "Why I Am a Catholic" essay in The Thing summarize Chesterton's reasons for becoming a Catholic. He just kept finding out that the Catholic Church told the truth:

There is barely space here to indicate this one thing out of the thousand things that confirm the same fact and confirm each other. I would undertake to pick up any topic at random, from pork to pyrotechnics, and show that it illustrates the truth of the only true philosophy; so realistic is the remark that all roads lead to Rome. Out of all these I have here only taken one fact; that the thing is pursued age after age by an unreasonable hatred that is perpetually changing its reason. Now of nearly all the dead heresies it may be said that they are not only dead, but damned; that is, they are condemned or would be condemned by common sense, even outside the Church, when once the mood and mania of them is passed. Nobody now wants to revive the Divine Right of Kings which the first Anglicans advanced against the Pope. Nobody now wants to revive the Calvinism which the first Puritans advanced against the King. Nobody now is sorry that the Iconoclasts were prevented from smashing all the statues of Italy. Nobody now is sorry that the Jansenists failed to destroy all the dramas of France. Nobody who knows anything about the Albigensians regrets that they did not convert the world to pessimism and perversion. Nobody who really understands the logic of the Lollards (a much more sympathetic set of people) really wishes that they had succeeded in taking away all political rights and privileges from everybody who was not in a state of grace. "Dominion founded on Grace" was a devout ideal, but considered as a plan for disregarding an Irish policeman controlling the traffic in Piccadilly, until we have discovered whether he has confessed recently to his Irish priest, it is wanting in actuality. In nine cases out of ten the Church simply stood for sanity and social balance against heretics who were sometimes very like lunatics. Yet at each separate moment the pressure of the prevalent error was very strong; the exaggerated error of a whole generation, like the strength of the Manchester School in the 'fifties, or of Fabian Socialism as a fashion in my own youth. A study of the true historical cases commonly shows us the spirit of the age going wrong, and the Catholics at least relatively going right. It is a mind surviving a hundred moods.

As I say, this is only one aspect; but it was the first that affected me and it leads on to others. When a hammer has hit the right nail on the head a hundred times, there comes a time when we think it was not altogether by accident. But these historical proofs would be nothing without the human and personal proofs, which would need quite a different sort of description. It is enough to say that those who know the Catholic practice find it not only right, but always right when everything else is wrong; making the Confessional the very throne of candour where the world outside talks nonsense about it as a sort of conspiracy; upholding humility when everybody is praising pride; charged with sentimental charity when the world is talking a brutal utilitarianism; charged with dogmatic harshness when the world is loud and loose with vulgar sentimentalism--as it is to-day. At the place where the roads meet there is no doubt of the convergence. A man may think all sorts of things, most of them honest and many of them true, about the right way to turn in the maze at Hampton Court. But he does not think he is in the centre; he knows.

Welcome home, Neophytes, reverts, and new Catholics! Make yourself at home, all cradle Catholics who renewed our baptismal promises--that perhaps others made for us--last night or will renew them today!

Happy Easter! Christ is Risen! He is Risen Indeed!
Posted by Stephanie A. Mann at 12:30 AM

Email ThisBlogThis!Share to TwitterShare to FacebookShare to Pinterest
Labels: catholic converts, Easter Sunday, Easter Vigil, G.K. Chesterton, The Catholic Church and Conversion, The Thing: Why I am a Catholic, The Well and The Shallows