Did She or Didn't She?: "My Cousin Rachel" 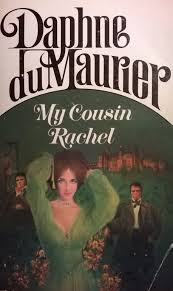 Daphne du Maurier was one of my favorite authors when I was in high school and I read almost all her novels (not sure about Rule, Britannia), and I read them all more than once. My paperback copy of My Cousin Rachel started falling apart and I found a used hardcover! Earlier this week Turner Classic Movies aired the 1952 movie based on the novel starring Olivia de Havilland and Richard Burton. The movie is very faithful adaptation of the novel and Olivia de Havilland's performance as Rachel captures the mysterious fascination of the character very well.

The question at the heart of the story is whether or not Rachel poisoned two cousins who loved her, first Ambrose whom she married and then Philip who wanted to marry her. She may not have given them poison through her brewed tisanes, which is what Philip comes to suspect, but she certainly "poisoned" them with obsessive love which destroyed both men. Her affair with Ambrose is told at a remove through his letters and her reports of his illness and change in behavior. We witness how Philip becomes obsessed with her, wants to give her everything, expects everything in return from her--and then begins to doubt not only her but his own suspicions about her. His guardian warns him that there are some women who through no fault of their own bring trouble and disaster to those who love them. Philip should have married Louise like everyone thought he should! 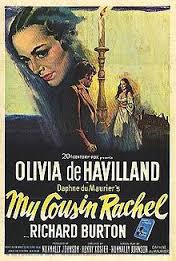 De Havilland's calm, pleasant face, soothing voice, elegant figure, and quiet, sly demeanor are perfect for the role: can someone so lovely be a murderer? But she also shows resolve and steely determination. Richard Burton, in his first Hollywood film, is young, handsome, and impetuous, yet brooding enough.

Evidently, a new adaptation of the novel is in the works (the BBC produced a meandering adaptation in the 1980's), according to the Daphne du Maurier website:

19th February 2016. The likelihood of a film for cinema of Daphne du Maurier’s novel My Cousin Rachelseems to be increasing. Before Christmas it became clear that Rachel Weisz and Sam Claflin had been cast for starring roles in the new movie. This week it has been suggested that Holliday Grainger will also join the cast.

News filtering through so far indicates that the writer-director Roger Michell will be reworking the novel and setting it in more modern times. However young Philip will still be at the heart of the story, which sees his guardian Ambrose die in circumstances which may incriminate Rachel. However the beguiling Rachel side-tracks Philip’s concerns when he becomes emotionally involved with her.

In the original novel Daphne du Maurier left the ending to the reader’s imagination, later saying that even she did not know if Rachel was innocent. It will be interesting to see how the film-makers decide to conclude the story.

If they resolve the ambiguity, they will destroy the story.
Posted by Stephanie A. Mann at 12:30 AM