Blessed Christopher Bales, priest and martyr, and companions (laymen who assisted him) Blessed Alexander Blake, and Blessed Nicholas Horner, were all executed on March 4, 1590 at three different sites in London. According to the Catholic Encyclopedia, his career as a missionary priest in England was brief:
Priest and martyr, b. at Coniscliffe near Darlington, County Durham,England, about 1564; executed 4 March, 1590. He entered the English College at Rome, 1 October, 1583, but owing to ill-health was sent to the College at Reims, where he was ordained 28 March, 1587. Sent to England 2 November, 1588, he was soon arrested, racked, and tortured by Topcliffe, and hung up by the hands for twenty-four hours at a time; he bore all most patiently. At length he was tried and condemned for high treason, on the charge of having been ordained beyond seas and coming to England to exercise his office. He asked Judge Anderson whether St. Augustine, Apostle of the English, was also a traitor. The judge said no, but that the act had since been made treason by law. He suffered 4 March, 1590, "about Easter", in Fleet Street opposite Fetter Lane. On the gibbet was set a placard: "For treason and favouring foreign invasion". He spoke to the people from the ladder, showing them that his only "treason" was his priesthood. On the same day Venerable Nicholas Horner suffered in Smithfield for having made Bales a jerkin, and Venerable Alexander Blake in Gray's Inn Lane for lodging him in his house.

In this autobiography, Father John Gerard, SJ, mentions Father Bales and another priest from Rheims, Father George Beesley, as being among those coming with him and Father Edward Oldcorne, noting that three of them suffered martyrdom while he did not:

"Two priests from Rheims joined us, as our former companions preferred to take time before they faced the dangers which awaited them on the opposite shores. The ship then set sail with four priests on board, a goodly cargo indeed, had not my unworthiness deprived me of the crown, for all those other three suffered martyrdom for the faith. The two priests were soon taken, and being in a short space made perfect, they fulfilled a long time. Their names were Christopher Bales and George Beesley, but my companion, the blessed Father Oldcorne, spent eighteen years of toil and labour in the Lord's vineyard, and watered it at length with his blood."
They were  beatified on December 15 in 1929 by Pope Pius XI. 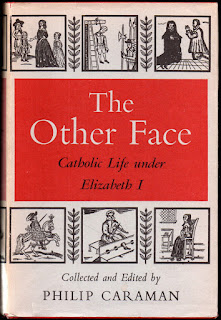 Philip Caraman, SJ, includes Blessed Christopher Bales' question to Judge Anderson in his collection of primary sources, The Other Face: Catholic Life Under Elizabeth I:
He was asked by the judge according to custom . . . when judgment was about to be pronounced, if he had anything to say for himself. He answered, "This only to I want to know, whether St. Augustine sent hither by St. Gregory was a traitor or not." They answered that he was not . . . He answered them, "Why then do you condemn me to death as a traitor? I am sent hither by the same see: and for the same purpose as he was. Nothing is charged against me that could not also be charged against the saint." But for all that they condemned him. (Greene, Collections); page 230.

The Catholic Encyclopedia also has an entry on Blessed Nicholas Horner and his sufferings and consolations:

Layman and martyr, born at Grantley, Yorkshire, England, date of birth unknown; died at Smithfield, 4 March, 1590. He appears to have been following the calling of a tailor in London, when he was arrested on the charge of harbouring Catholic priests. He was confined for a long time in a damp and noisome cell, where he contracted blood poisoning in one leg, which it became necessary to amputate. It is said that during this operation Horner was favoured with a vision, which acted as an anodyne to his sufferings. He was afterwards liberated, but when he was again found to be harbouring priests he was convicted of felony, and as he refused to conform to the public worship of the Church by law established, was condemned. On the eve of his execution, he had a vision of a crown of glory hanging over his head, which filled him with courage to face the ordeal of the next day. The story of this vision was told by him to a friend, who in turn transmitted it by letter to Father Robert Southwell S.J., 18 March, 1590. Horner was hanged, drawn and quartered because he had relieved and assisted Christopher Bales . . .
Posted by Stephanie A. Mann at 12:30 AM