Reading Half of a Book: "Conversions" 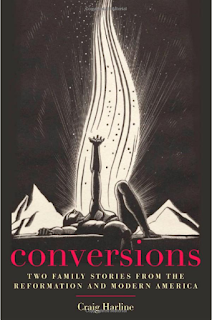 As the publisher, Yale University Press, describes the book:

This powerful and innovative work by a gifted cultural historian explores the effects of religious conversion on family relationships, showing how the challenges of the Reformation can offer insight to families facing similarly divisive situations today. Craig Harline begins with the story of young Jacob Rolandus, the son of a Dutch Reformed preacher, who converted to Catholicism in 1654 and ran away from home, causing his family to disown him. In the companion story, Michael Sunbloom, a young American, leaves his family’s religion in 1973 to convert to Mormonism, similarly upsetting his distraught parents. The modern twist to Michael’s story is his realization that he is gay, causing him to leave his new church, and upsetting his parents again—what will they do now?

Recounting these stories in short, alternating chapters, Harline underscores the parallel aspects of the two far-flung families. Despite different outcomes and forms, their situations involve nearly identical dynamics and heart-wrenching choices. Through the author’s deeply informed imagination, the experiences of a seventeenth-century European family are transformed into immediately recognizable terms.

Jacob Rolandus was in a situation comparable to that of English converts, and so I was most interested in his story. Harline describes not only the family conflict Jacob's conversion caused, but the careful response of Catholic in Calvinist Holland. Although Catholics weren't in as much danger there as they were in England, there were still restrictions on their freedom. It could be dangerous to take in a convert--he could be an agent of the government trying to find out about the Catholic underground. Rolandus had to prove not only to his parents that his mind could not be changed, but prove to the Catholics, including the Jesuits or others from whom he was seeking help and protection from his parents, that he could be trusted.

Harline explores the moral conflict of Jacob's disobedience to his parents when he becomes a Catholic. His father wants him to come home but Jacob, who is 21, wants to make a new life for himself in the Catholic world. He is finally accepted by the Society of Jesus and studies for the priesthood, eventually becoming a missionary to Brazil.  Jacob and his sister Maria exchange letters in which he tries to convince her to become a Catholic and she tries to convince him to come back home and be reunited with the family in their Reformed faith. Harline has provided a complete translated transcript of these letters on his website.

Harline presents these two conversion stories as parallel, but they really aren't. Jacob Rolandus becomes a Catholic; he is faithful to the Catholic Church; he becomes a Jesuit and a missionary, devoting his life to the spreading of the Gospel. "Michael Sunbloom" becomes a Mormon but then decides he can't remain a Mormon because he has decided he is a homosexual, so he is not faithful to the Mormon Church. Because, as a couple of other reviewers I've read have also noted (like this one), Harline focuses the discussion of conversion, conscience and conflict all on a relational level, he doesn't see the truth claims of religious faith. In fact, he rather dismisses the whole idea of truth in religious affiliation as a case of--particularly when describing the correspondence between Jacob and Marie--something habitual and social. Then why did Jacob leave his home, hurt his parents, sacrifice his life, and become not just a Catholic, but a Jesuit and a missionary? Do we really make such great changes in our lives out of habit and social convention? Because Jacob had some Catholic friends, he became a Catholic and endured all that meant in his time? That's why I skipped so much of the "Michael Sunbloom" narrative and don't accept Harline's conclusions. But I enjoyed the story of Jacob Rolandus, SJ. He was a brave and resolute man.
Posted by Stephanie A. Mann at 12:30 AM