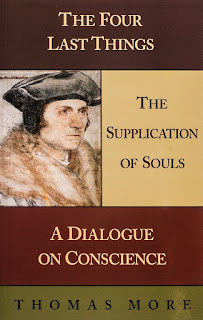 Back to English Reformation subject matter! Today, my National Catholic Register blog features a discussion of the theological virtue Hope, the Poor Souls in Purgatory, and St. Thomas More! In the article I cite The Supplication of Souls:

St. Thomas More wrote his 1529 “The Supplication of Souls” to defend the doctrine of Purgatory and the devotion of prayer for the dead against attacks in pre-Reformation England. Anticipating Pope Benedict XVI—who said that if Purgatory did not exist, we would have to invent it— by five centuries, More comments that Reason, not to mention God’s mercy and justice, demands that Purgatory exist:

“For since God in His righteousness will not leave sin unpunished and in His goodness will not perpetually punish the sin after the person’s repentance, it follows there must be temporal punishment. And now since the person often dies before undergoing such punishment . . . a very child, almost, can see the conclusion: that the punishment remaining due and undone at death is to be endured and sustained afterward.” (p. 135 in Scepter Publishers’ edition, rendered in Modern English by Mary Gottschalk)

The Souls in Purgatory accept that they should undergo this purification in accord with God’s mercy and justice, noting that neither they nor the living should presume on God’s mercy, but submit to His justice. While they suffer in Purgatory, the Souls fear that they will be forgotten if the attacks against prayers and Masses for them influence their families—as we are too really to presume that our beloved dead are in Heaven and neglect to pray for them. 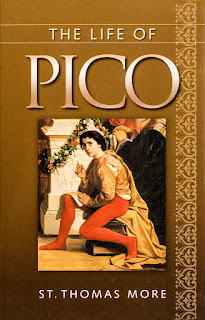 Next up on my personal reading list is More's The Life of Pico, also from Scepter Publishers in an updated translation:

Presented to modern readers in English for the first time in 500 years, The Life of Pico is a biography of one of the Renaissance’s most famous figures: Giovanni Pico de la Mirandola (1463-94). Given More’s demanding personal spiritual life, one would assume that More wishes to praise a famous and virtuous man. But what emerges from this book is quite different. Pico turns out to be an extraordinarily virtuous, talented, and wealthy man, but a man nonetheless, who is missing something essential. And so More calls Pico “a very spectacle” of virtue.

More sees Pico as very much like himself, as the two turn out to have very similar life experiences. Both carry some scars from difficult or missing relationships with their fathers, both are extremely talented and powerful in their time, and both had been steered toward a religious vocation which they did not embrace.

The book is as much a riddle about More as it is an explanation of Pico. More’s great-grandson and biographer, Cresacre More, claims that Thomas More as a young man sought to emulate Pico once he decided that his path in life was marriage and not the cloth. The book’s first half contains the abridged account of Pico’s life. The second half is More’s rhymed verse on the 12 rules of spiritual battle, the 12 weapons of spiritual battle, and the 12 properties of a lover, followed by Pico’s prayer to God. In the last analysis, this biography of Pico becomes an exercise in the discernment of true virtue, in the contradictions and difficulties one encounters in the immersion into the world, and at the same time, in the life of God.
Posted by Stephanie A. Mann at 12:30 AM