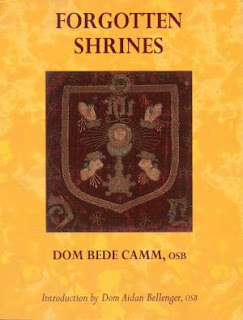 This parish website posts the story of Blessed George Napper (or Napier) as told by Father Robert F. McNamara:

George Napper (or Napier) belonged to a Catholic recusant family of considerable prominence, (and was grand nephew of the English Franciscan cardinal, William Peyto). Born at Holywell Manor in Oxfordshire, he managed to secure entrance in 1565 at Corpus Christi College, Oxford, but was expelled in 1568 as a recusant. In 1580 he was arrested as a recusant and imprisoned for over eight years.

Weary of imprisonment at the end of that time, Napper decided to capitulate, and declared his acceptance of the religious supremacy of the Queen. But after his release from jail, he became increasingly ashamed of having given in. Determined to make generous amends for having rejected the pope, he decided to study for the Catholic priesthood. God had given him a second chance.

Crossing the English Channel to Douay in Flanders, he now sought admission to the English College there. Ordained a Catholic secular priest in 1596, he was sent back to England in 1603 and spent the remaining seven years of his life on the mission in his native Oxfordshire. . . .

Father Napper naturally followed the policy of working in secrecy, but like many another brave priest, he was at one point apprehended by the police as a suspect. They caught up with him outside a village near Oxford early in the morning of July 19, 1610. Those who had stalked him failed in searching him to find two Eucharistic hosts and a small reliquary that he carried concealed on his person. They did find, however, his breviary and set of holy oils. These provided evidence enough to his priesthood to present at the next court session.

Napper’s friends managed to obtain a stay of his execution when he was arraigned, and were working for a total reprieve. But while in prison Father George ministered to a certain condemned criminal, who died declaring himself a Catholic. Now, “reconciling” a fallen-away Catholic was a particularly heinous crime according to the current anti-Roman legislation. The Anglican clergy therefore raised a row with the court, demanding capital action against the prisoner. Under cross-examination, Napper admitted that he had reconciled the man in question. He even said, wittily, that he would be glad to do the same for the judges. Somehow he was again reprieved. But then he refused to take the oath of allegiance that described the pope’s power to depose as “impious, heretical and damnable”. That was too much for the court to take. George Napper was condemned to death.

“Seminary priest” Napper was executed at Oxford on November 9, 1610.

Dom Bede Camm provides the details of Blessed George Napper at his execution, that he prayed for King James I (that he become a great saint in Heaven), that he confessed that he was a Catholic priest and that only for being that did he die, and that he was a great sinner. He prayed the De Profundis, the Miserere Mei, and repeated several times, "In manus tuas, Domine, commendo spiritum meum", and struck his breast three times (perhaps praying the words he had prayed before taking Communion at each Mass he'd ever said: "Domine non sum dignus ut intres sub tectum meum, sed tantum dic verbo et sanabitur anima mea"?)

Blessed George Napper, pray for us!
Posted by Stephanie A. Mann at 12:30 AM