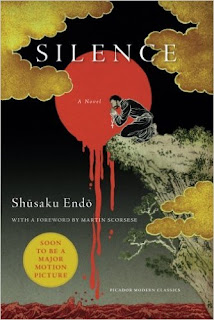 The trailer for Martin Scorsese's film adaptation of Shusaku Endo's Silence is available here. Silence tells the story of Jesuit missionaries in Japan facing, with the Catholics whom St. Francis Xavier and other Jesuits have brought to conversion, torture and martyrdom when Japanese authorities ban Christianity--and expel the Jesuits with an edict in 1587. Remember that Elizabeth I's government passed the "Act against Jesuits, Seminary priests and other such like disobedient persons" (27 Eliz. c. 2) in 1585!

On February 5, 1597, Jesuit Paul Miki and 25 others were crucified in Nagasaki. They are remembered on the Church's calendar on February 6 (since St. Agatha's feast day was already on February 5). The story told in Endo's Silence occurs in the next century, starting about 1639, when Fathers Rodrigues and Garrpe go to Japan to find out what has happened to Father Ferreira, who may have apostatized.

The Jesuits, the other missionary priests, and the Catholic laity in England faced the "Bloody Question", the Oath of Supremacy, Topcliffe's tortures, and many other dangers. The Catholics in Japan faced the temptation of stomping on the image of Jesus or the Blessed Virgin Mary (a fumie) as an act of denying Jesus. Father Rodrigues undergoes the trial of the fumie while the laity are being tortured--he can save them if he denies Jesus.

I'm sure that Scorsese's film will fully depict the brutality of the tortures suffered by the Catholics, as the trailer hints. I read Endo's novel years ago and I definitely found it troubling and reading Scorsese's foreword to the latest Picador edition, I think I would find his interpretation of the movie just as troubling. To say that we need "the figure of Judas" just as much as "the figure of Christ" so that Christianity may live and "adapt itself to other cultures and historical moments" is ridiculous. Jesus is not a "figure"; He is Our Savior and Redeemer. The Church lives because He lives. Scorsese seems to treat Faith like concept not a Theological virtue and Christianity like a system not the Body of Christ.

The Scottish composer James Macmillan wrote his Symphony No. 3 as a meditation on Endo's Silence.
Posted by Stephanie A. Mann at 12:30 AM