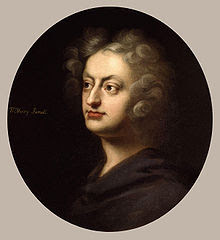 Henry Purcell died on November 21, 1695. Naxos, which has a CD of The Best of Purcell, sums
up his achievement here:

Henry Purcell was one of the greatest English composers, flourishing in the period that followed the restoration of the monarchy after the Puritan Commonwealth period. He spent much of his short life in the service of the Chapel Royal as a composer, organist and singer. With considerable gifts as a composer, he wrote extensively for the stage (particularly in a hybrid musico-dramatic form of the time), for the church, and for popular entertainment. He was a master of English word-setting and of contemporary compositional techniques for instruments and voices. He died in 1695, a year after composing funeral music for Queen Mary.

Gerard Manley Hopkins, SJ praised Purcell in verse:
The poet wishes well to the divine genius of Purcell and praises him that, whereas other musicians have given utterance to the moods of man’s mind, he has, beyond that, uttered in notes the very make and species of man as created both in him and in all men generally.
HAVE, fair fallen, O fair, fair have fallen, so dear
To me, so arch-especial a spirit as heaves in Henry Purcell,
An age is now since passed, since parted; with the reversal
Of the outward sentence low lays him, listed to a heresy, here.
Not mood in him nor meaning, proud fire or sacred fear,
Or love or pity or all that sweet notes not his might nursle:
It is the forgèd feature finds me; it is the rehearsal
Of own, of abrupt self there so thrusts on, so throngs the ear.
Let him Oh! with his air of angels then lift me, lay me! only I’ll
Have an eye to the sakes of him, quaint moonmarks, to his pelted plumage under
Wings: so some great stormfowl, whenever he has walked his while
The thunder-purple seabeach plumèd purple-of-thunder,
If a wuthering of his palmy snow-pinions scatter a colossal smile
Off him, but meaning motion fans fresh our wits with wonder.

Hear a sample of Purcell's Music for Queen Mary's Funeral here.
Posted by Stephanie A. Mann at 12:30 AM