Newman's Angels and All Souls' Day 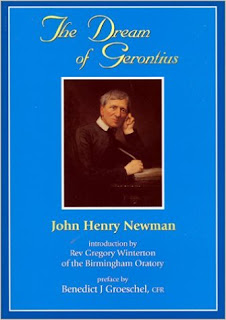 Please see my blog post at the National Catholic Register, scheduled to appear this morning here.

It's all about Blessed John Henry Newman's epic poem about the Four Last Things and the Poor Souls in Purgatory, particularly one poor soul, Gerontius.

In 1865 almost 20 years after becoming a Catholic, Newman wrote “The Dream of Gerontius”, a poetic epic about the soul after death. The poem was published in two installments of “The Month”, a journal published by the Jesuits in England later that year. It was an immediate and great success, even among non-Catholics, which is surprising since the soul of Gerontius, the title character, is committed to Purgatory. The role of angels, particularly of the Guardian Angel, is one of the highlights of the poem.

While it is sometimes mentioned along with Dante’s “Divine Comedy”, Newman’s poem is more personal and spiritual since it tells the experience of one soul after death, not the journey of a poet through Hell, Purgatory, and Heaven. The text of the poem is available here.

Please read the rest here.
Posted by Stephanie A. Mann at 1:00 AM