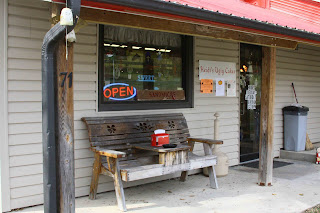 So yesterday I posted on the strange story of a group of Cubs baseball fans unable to use their cellphones to find out what was happening in the seventh game of the World Series. They had gathered outside Wrigley Field and the WSJ writer noted that no one "seemed" to have a simple little piece of technology, a portable transistor radio.

A couple of weeks ago my husband and I drove to Norfork, Arkansas and stayed at a "getaway cabin" just yards away from the White River. 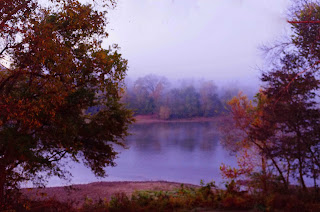 It was indeed a getaway: quiet, far off the road, no phone service, no wifi, no clocks in the cabin except on the microwave. We enjoyed seeing the Milky Way and hundreds of stars at night so far from any light pollution. We did buy an inexpensive AT&T phone so we'd at least have phone access. There was a television and I brought a transistor radio.

As I said, I like access to the internet and posting on this blog and sharing on social media. My husband wanted to post pictures on facebook, check email, etc. So we did leave the cabin a few times to find free wifi at restaurants and coffee shops. We drove to The Printing Press Cafe and Ice Cream Parlor in Calico Rock, for example, and visited another coffee shop in Mountain Home called the Angler's Cafe.

In Norfork, however, we found Heidi's Ugly Cakes after several people told us we should try it. We need to go back and have some cake next time. The story of how the proprietor opened the little cafe and how it came to be named "Heidi's Ugly Cakes" is part of the attraction. Heidi's cakes are ugly just because they aren't bundt cakes or layer cakes--they are not "fou-fou" as she was quoted in a newspaper story framed and posted inside. Her cakes are baked in glass (Pyrex) baking dishes. She also makes different sandwiches, small fried fruit pies, and other treats--we split a delicious cinnamon roll, sweet and spicy. Her mother-in-law, who encouraged her to find a way to sell her cakes, called them "Heidi's Ugly Cakes" and even gave her a sign with those words. Heidi sold her cakes to a restaurant and they were very popular items on the menu there.

That restaurant closed however, and Heidi's mother-in-law died. An admirer of her cakes, however, wouldn't give up. He wanted Heidi to open her own place. He found the location--it's right next door to a liquor-cigarette-bait shop--and even raised some money to open the place. Norfork is a small town but many people wanting to fish for trout on the White River avail themselves of services there, so Heidi's is a busy place. She was a welcoming hostess and a very busy cook and baker. She put on fresh coffee for us and then told me to "cheat" and pour our coffee while it was still brewing. The half-and-half was in the fridge with the cakes. She even told us we could use her wifi when the cafe was closed: "just sit out there on the bench and surf the web, honey." 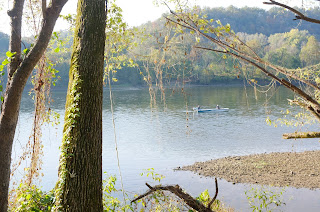 Or, we could watch the river flow on by and hear the fish jumping.

Pictures copyright 2016, by Mark U. Mann. All rights reserved.