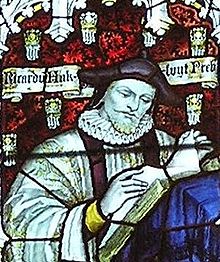 The Hakluyt Society has been celebrating the 400th anniversary of Richard Hakluyt's death (November 23, 1616) including lectures and a church service:

At 10.30 a.m. on Sunday 27 November, there will be a commemorative service in All Saints Church, Wetheringsett, Suffolk, IP14 5PP, Hakluyt’s parish, which will be led by the Bishop of St Edmundsbury and Ipswich, with the dedication of a stone plaque in memory of Richard Hakluyt. This will be followed by a buffet lunch in the Village Hall with a programme of music and readings. There will be an opportunity for small groups of Hakluyt Society members to visit the surviving part of Hakluyt’s former rectory.

Among the major commemorations taking place this year is the 400th anniversary of the death of Richard Hakluyt (1552–1616), England’s greatest promoter of overseas expansion. Hakluyt has always been an elusive and shadowy figure: there is no known surviving portrait of him. Likewise, there are no written accounts of his physical appearance. Like his contemporary, the poet John Donne, Hakluyt was successful in his profession, securing important clerical positions. On his death he was a priest at Westminster Cathedral, a position he took up in 1602 and, from 1590, rector of Wetheringsett and Brockford. He was, as Peter Mancall neatly sums up in his biography, Hakluyt’s Promise: An Elizabethan’s Obsession for an English America (2007), ‘famous enough to be buried in Poet’s Corner in Westminster Abbey, but not famous enough to merit a plaque telling of his bones being buried there’.

Hakluyt’s monument remains his work, capped by his editing of The Principal Navigations, Voyages, Traffiques and Discoveries of the English Nation, which first appeared in one large volume in 1589 and then in an expanded, updated edition in three volumes between 1598 and 1600. These publications created a rationale and plan for English commercial activity (hence the focus on ‘Traffiques’) in places such as Muscovy, Persia and the Levant, along with maritime exploration in search of a North-east or North-west Passage to China and colonial expansion in the New World, emulating and counteracting the achievements of Catholic rivals, notably Spain. The works of Hakluyt’s fellow quadricentennials, Shakespeare, Cervantes and even Ben Jonson (if we count the appearance of his first folio of 1616) may have transformed the literary landscape forever, but Hakluyt changed the geopolitical landscape through his tireless advocacy of English exploits in a world of increasingly global competition.

Illustration credit from Wikipedia Commons: English writer Richard Hakluyt (c. 1552 or 1553 – 23 November 1616) pictured in a stained glass window in the West Window of the South Transept of Bristol Cathedral.
Posted by Stephanie A. Mann at 12:30 AM