The Daily Mail has a great photographic story on the murals that John Shakespeare, William Shakespeare's father, had to paint over in the Chapel of the Guild of the Holy Cross in Stratford-upon-Avon in 1563. The paintings depict, according to the Stratford Town Trust, "the legend of St George and the Dragon, the Martyrdom of St Thomas Beckett and the Dance of Death."(Note that there are various problems with the text of the story. Henry VIII was dead by 1563; one of the restorers does not know the meaning of "iconoclastic", etc--but the pictures of the "Dance of Death", the first mural to be restored are great.)

In The Guardian, Jonathan Jones comments on what he sees as a morbid fascination with death and the devil in medieval England:

The paintings restored in the Guild Chapel reveal the powerful dream-world that was visible to ordinary townspeople 500 years ago. Devils and death loomed up on painted walls. Whether they were painted simply, as in Stratford, or done with the genius of a Bosch, these were collective fantasies of spectacular power.

The project that has saved Stratford’s murals deserves to be imitated wherever there are traces of medieval art still surviving in Britain. It does not matter if these images are fine art. They are something more important: a reminder of what it is to be human in a world shadowed by death and the devil.

He must fantasizing today if he does not think the world is not shadowed by death--we all will die--and the devil--there is evil in the world today--and that neither should be acknowledged or feared. But he forgets that those medieval people also had Faith in their Redeemer, Hope for salvation, and Love for God and neighbor. Only one of the three murals has been restored. St. George and the Dragon would have reminded them that God conquers the Devil and St. Thomas a Becket would have reminded them that they had great intercessors in Heaven. Jones has overemphasized one aspect of medieval piety. 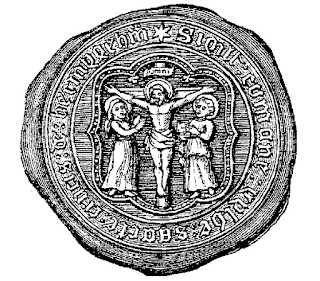 The Guild of the Holy Cross (their seal is pictured above) was essential to Stratford, according to this site:

Established in the 13th century, it became the heart of Stratford's commercial, civic, social and religious life. The Guild helped its members to network, strike business deals, and even (so it was claimed) get into heaven faster.

Both men and women could become Guild members by paying a small fee. Joining was a good idea if you wanted to meet influential people and widen your network of contacts. Most members were prosperous local tradesmen, craftsmen and their families. But local clergy, gentry and even nobility joined too. Some members came from other towns like Coventry, London and Bristol.

The Guild provided 'social services' in medieval Stratford. It helped its members when they were ill, and supported their families if they died. It also gave 'alms' (charity) to poor and vulnerable local people, building a range of almshouses (sheltered accommodation) next to the Guildhall in about 1500.

It also looked after local infrastructure like bridges, and founded the first school in Stratford. In 1295 it appointed a schoolmaster called Richard as 'rector scholarum' to teach members' sons Latin, music and the principles of Christian faith.

The Guild survived the reign of Henry VIII but not that of Edward VI (and there might not have been time for its restoration under Mary I). The lay members of the Guild had wealth and power, the site comments, and "this wealth and power was its undoing". What was its undoing was prayer for the dead as Edward VI's Protectors destroyed the last vestiges of remembering the Poor Souls in Purgatory in England.
Posted by Stephanie A. Mann at 12:30 AM