Not English, But Russian, Polyphony 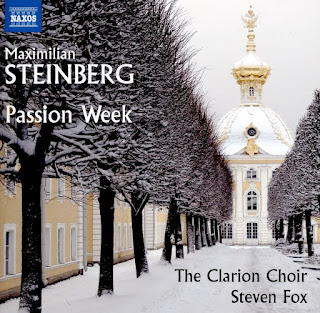 As the liner notes to this new recording of Maximilian Steinberg's Passion Week informed me, the composer was the pupil and son-in-law of Nikolay Rimsky-Korsakov, who had a great deal of influence on Russian Orthodox sacred choral music in his time:

The achievements of the ‘new Russian choral school’ in the late nineteenth and early twentieth centuries have been widely recognised in the musical world. In the course of this veritable renaissance of new compositions and arrangements for unaccompanied choral voices, a pleiad of composers, spearheaded by Pyotr Tchaikovsky, and followed by Alexander Kastalsky, Pavel Chesnokov, Alexander Gretchaninov, Viktor Kalinnikov, Alexander Nikolsky, and Sergey Rachmaninov, to name just a few, explored the sonorous and expressive capabilities of the choral instrument to an unprecedented degree. They sought out new ways of evoking the splendour of the ‘Kingdom of God on earth,’ joining the spiritual depth of ancient Christian liturgical texts and chants with transcendently  beautiful choral polyphony.

Generally speaking, this school is associated with the city of Moscow, and in particular with the Moscow Synodal School of Church Singing and Moscow Synodal Choir. Indeed, many of the composers—Kastalsky, Kalinnikov, Nikolsky, and Chesnokov—were affiliated with the Synodal School, and important premieres such as Rachmaninov’s All-Night Vigil and Gretchaninov’s Passion Week, took place in Moscow. Less known is the role played in this movement by composers whose primary sphere of activity was in St Petersburg, regarded as a more Western-looking bastion of modernity and the avant-garde.

Nonetheless, St Petersburg was not altogether unaffected by the general movement in the liturgical arts towards the recovery of a more traditional, nationally Russian and Eastern Orthodox style. In the realm of church architecture, this was reflected by the construction of such edifices as the Dormition Cathedral, the Church of the Saviour on the Blood, and the Naval Cathedral of St Nicholas in Kronstadt, all completed in the early twentieth century. In the realm of Russian Orthodox sacred choral music, the most important figure was Nikolay Rimsky-Korsakov (1844–1908), and a number of composers who were in one way or another connected with him: Anatol Liadov (1855–1914), Sergey Liapunov (1859–1924), Nikolay Tcherepnin (1873–1945), and Alexander Chesnokov (1880–1941), whose contributions to sacred choral music have yet to be thoroughly explored. Even less known is the remarkable work featured on the present recording—Passion Week, composed by Rimsky-Korsakov’s favourite student and son-in-law, Maximilian Steinberg (1883–1946).

Rimsky-Korsakov’s involvement with the choral church music of the Russian Orthodox Church dates from his tenure at the Imperial Court Chapel from 1883 to 1894, as assistant to Mily Balakirev. While there, he was involved with producing polyphonic arrangements of traditional unison chants, and also wrote a number of compositions in a deliberately simple yet original style, in accordance with the emerging national character of Russian church music. Although after leaving the Chapel, Rimsky-Korsakov wrote no more choral music for the church, he evidently transmitted his exploration of early chants, as well as some degree of familiarity with the sources of ecclesiastical melodies, to his students. Some fifteen years after his death, this knowledge manifested itself most wondrously in Maximilian Steinberg’s Passion Week.

This sacred polyphony has not been without controversy, however, as this website demonstrates:

the use of Western-style polyphony in church has been opposed in recent centuries by several saints (including St. Seraphim of Sarov; [14]St. Philaret Drozdov, Metropolitan of Moscow; [15] St. Ignatius Brianchaninov; [16] St. Barsanuphius, Elder of Optina; [17] and the New Martyr St. Andronik Archbishop of Perm) as well as by the Holy Synod of Constantinople, [18] the Holy Synod of the Church of Greece, [19] and by many venerable hierarchs (such as Patriarch Germogen of Russia [20] in the seventeenth century, Metropolitan Evgeny of Kiev [21] in the eighteenth century, and Archbishop Averky of Syracuse and Holy Trinity Monastery [Jordanville] in the twentieth century). Nevertheless, other saints (primarily some of the New Martyrs of twentieth-century Russia) and other hierarchs used and loved Western-style polyphonic ecclesiastical music because they appreciated its beauty. Their acceptance is perfectly understandable, since musical preferences are not dogmatic issues but are dependent upon cultural circumstances and personal taste. Besides, if, according to St. John of the Ladder, lovers of God are moved to spiritual joy, to divine love, and to tears even by worldly songs, [22] incomparably more so will they be inspired by hymns, even if their melodies are of a worldly character or bear some of the aforementioned shortcomings.
Posted by Stephanie A. Mann at 12:30 AM