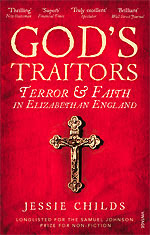 Henry Vaux, the eldest son of William Vaux, third Baron Vaux of Harrowden, died on November 19, 1587. He was about 28 years old. He had renounced the family title in favor of his half-brother George (William remarried after the death of his first wife) because he had decided to devote his life to protecting the Jesuit missionary priests like St. Edmund Campion, St. Robert Southwell, John Gerard, Henry Garnet, Robert Persons, etc. His sisters Eleanor and Anne were also involved in these projects, which were of course fraught with danger because it was illegal in England to attend the Mass, to deny the governorship of the monarch over the Church, and to assist any Catholic priest, since he was a traitor. Jessie Childs told the story of the Henry's career in her study of  the Vaux family in God's Traitors: Terror & Faith in Elizabethan England, which I've recently reviewed for a publication (more info to be announced).

Henry Vaux was tutored by Edmund Campion starting in 1568, who found Henry and his sister Eleanor to be excellent scholars with great aptitude, when Campion was still at Oxford University. He was particularly impressed with Henry, as this letter demonstrates:

From the day your Father first asked me to see you and to superintend your education I have become amazingly attached to you. For I marvelled and was almost perplexed when I saw a boy who had not yet completed his ninth year, scion of a notable family, of such pleasant demeanour and refinement; who wrote and spoke Latin so well; who was equally good at prose and verse, accurate and quick at figures, devoted to the study of letters, diligent in application, able to sketch out and arrange his whole course of study. If circumstances had permitted it I should have desired nothing better than to give my enthusiastic help to that celebrated man, your Father, and to you, a boy of such great promise. But since some unknown fate, yours and mine, has deprived you of me and me of you, your Father (by whom I am dearly loved, and whom I particularly revere) has easily persuaded me that my voice and advice should come to you. . . . (Translated by Father Godfrey Anstruther)

Vaux grew up at Grace Dieu, Leicester under the care of his maternal grandmother from 1571 to 1581. His cousins, the poet John Beaumont and playwright Francis Beaumont, were also raised there.

As a poet, Vaux was following a family tradition, for his grandfather, Thomas Vaux, the second Baron Vaux had written poetry--and had been the friend of poets Thomas Wyatt and Henry Howard, the Earl Surrey. One of Thomas Vaux's poems, "A Quiet Mind":

When all is done and said,
In the end thus shall you find,
He most of all doth bathe in bliss
That hath a quiet mind:
And, clear from worldly cares,
To deem can be content,
The sweetest time in all his life
In thinking to be spent.

The body subject is
To fickle Fortune's power,
And to a million of mishaps
Is casual every hour;
And death in time doth change
It to a clod of clay;
Whereas the mind, which is divine,
Runs never to decay.

Companion none is like
Unto the mind alone;
For many have been harmed by speech,
Through thinking few or none.
Fear oftentimes restraineth words,
But makes not thought to cease;
And he speaks best, that hath the skill
When for to hold his peace.

Our wealth leaves us at death;
Our kinsmen at the grave;
But virtues of the mind unto
The heavens with us we have.
Wherefore, for virtue's sake,
I can be well content,
The sweetest time in all my life
To deem in thinking spent.

When his former tutor Father Edmund Campion, SJ, returned to England in 1580 with Father Robert Persons, SJ, Henry Vaux began his career as a priest smuggler which continued until his arrest on November 4, 1586 when pursuivants were looking for the Jesuit priests Robert Southwell and Henry Garnet. Imprisoned in Marshalsea, Vaux became desperately ill and was released on "medical leave" in May of 1587. His sisters Anne and Eleanor cared for him until his death.

In 2008 Timothy Christopher Hacksley submitted a thesis for his M.A. at Rhodes University which contains the texts of the Vaux's poems and it may be accessed here.
Posted by Stephanie A. Mann at 12:30 AM