St. Thomas More was sentenced to death on July 1, 1535. St. Oliver Plunkett was hanged, drawn and quartered on July 1, 1681 (please see my blog at The National Catholic Register telling his story here). And there is one more martyr, Blessed Thomas Maxwell: 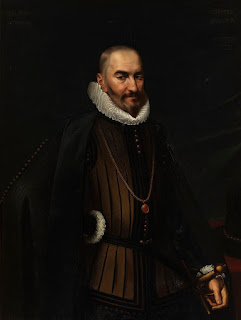 A martyrdom in London during James I's reign was an event with international implications--the Spanish ambassadors were quite active around this time in pursuing pardons or even exile (knowing the priest would very likely return).
Blessed Thomas Maxfield was born in Stafford gaol, about 1590, martyred at Tyburn, London, Monday, 1 July, 1616. He was one of the younger sons of William Macclesfield of Chesterton and Maer and Aston, Staffordshire (a firm recusant, condemned to death in 1587 for harbouring priests, one of whom was his brother Humphrey), and Ursula, daughter of Francis Roos, of Laxton, Nottinghamshire. William Macclesfield is said to have died in prison and is one of the prætermissi as William Maxfield; but, as his death occurred in 1608, this is doubtful. Thomas arrived at the English College at Douai on 16 march, 1602-3, but had to return to England 17 May, 1610, owing to ill health. In 1614 he went back to Douai, was ordained priest, and in the next year came to London. Within three months of landing he was arrested, and sent to the Gatehouse, Westminster. After about eight months' imprisonment, he tried to escape by a rope let down from the window in his cell, but was captured on reaching the ground. This was at midnight 14- 15 June, 1616. For seventy hours he was placed in the stocks in a filthy dungeon at the Gatehouse, and was then on Monday night (17 June) removed to Newgate, where he was set amongst the worst criminals, two of whom he converted.

On Wednesday, 26 June, he was brought to the bar at the Old Bailey, and the next day was condemned solely for being a priest, under 27 Eliz., c, 2. The Spanish ambassador* did his best to obtain a pardon, or at least a reprieve; but, finding his efforts unavailing, had solemn exposition of the Blessed Sacrament in his chapel during the martyr's last night on earth. The procession to Tyburn early on the following morning was joined by many devout Spaniards, who, in spite of insults and mockery, persisted in forming a guard of honour for the martyr. Tyburn-tree itself was found decorated with garlands, and the ground round about strewn with sweet herbs. The sheriff ordered the martyr to be cut down alive, but popular feeling was too strong, and the disemboweling did not take place till he was quite senseless.

He was beatified by Pope St. John Paul II as one of the 85 Martyrs of England and Wales.

Downside Abbey, the Tyburn Convent near Marble Arch, and Holy Trinity Catholic in Staffordshire each honor his relics. See this site for a picture of an altar in Holy Trinity depicting the martyr.*The Spanish Ambassador at that time was Diego Sarmiento de Acuña, 1st Count of Gondomar, who had succeeded in obtaining the release of Luisa de Carvajal in 1614.
Posted by Stephanie A. Mann at 1:00 AM