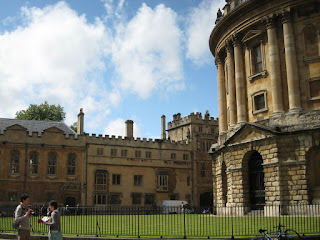 From the Imaginative Conservative, by Jason Baxter:

And as you walk through these streets and quietly pass into and then out of the shadows, you feel a smallness: these buildings have been here for centuries and have that noble antiquity of an earlier and prouder age that did not ask “how much” but “what should be done.” The buildings don’t look down on you, because they’re too lofty, too concerned with higher dreams. You feel small because you know that, to them, you are nothing. They have heard centuries of idle chatter and adolescent boasting; they have heard the first authentic thoughts of learned men; they have seen trees, older than the New World, grow up and die within their walls. These buildings feel as old as the seasons and the streams that flow constantly among them. Experiencing such august nobility in Oxford is to encounter a solemn, foreboding, and mysterious antiquity.

And it’s not only American tourists who get this strange, melancholic feeling about Oxford. Even those iconic titans, Lewis and Tolkien, whose personalities have blended into the stones of the city, felt it, too. Tolkien, in his wonderful Anglo-Saxon manner, called Oxford that “Many-mansion’d, tower covered” city “in its dreamy robe of grey/… aged in the lives of men,/ Proudly wrapt in mystic mem’ry overpassing human ken.” In Lewis’s short poem “Oxford,” he describes this city as a place of deep serenity, like the perpetual movements of the city’s somnolent rivers: “A clean, sweet city lulled by ancient streams…/ A refuge of the elect, a tower of dreams.” Similarly, Hopkins called Oxford, “Towery city and branches between towers; / Cuckoo-echoing, bell-swarméd, lark charméd, rook-racked, river-rounded.” And if you go inside the Ashmolean Museum, you will see any number of romanticizing paintings of the city that give you an Oxford, bathed in soft light. What the Pre-Raphaelites did for knights and ladies, these painters did for Oxford: they give a painfully nostalgic view of the medieval city. To such astute observers, Oxford is that city that mingles antiquity, the natural, and a keen sense of nostalgia. 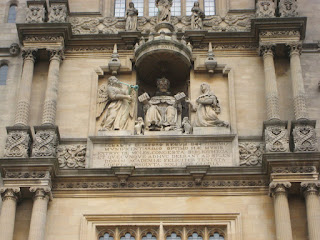 Read the rest there. I concur.