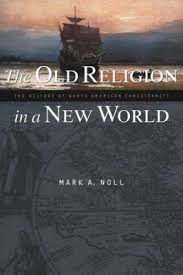 The Eerdman's blog offers an excerpt from Mark A. Noll's book The Old Religion in a New World about the development of religious freedom in the colonies before the American Revolution:

Before the mid-eighteenth century, church and state were bound together more closely in New England (with the exception of Rhode Island) and the Chesapeake colonies of Virginia and Maryland (along with South Carolina) than they were in England at the same time. As part of the settlement of William and Mary as British monarchs in 1689, Parliament passed “An Act for exempting their Majesties Protestant subjects, dissenting from the Church of England, from the penalties of certain laws.” This Act guaranteed freedom of worship to Trinitarian Protestant Nonconformists, even as it reaffirmed existing laws prohibiting the dissenters’ entrance to the universities, membership in Parliament, or service as officers in the army and navy. (Roman Catholics and Unitarian Protestants continued to suffer harsher disabilities.) The New England and Chesapeake colonies acknowledged this Act of Toleration, but in practice they restrained New England’s non-Puritans and the Chesapeake’s non-Anglicans more closely than non-Anglicans were restrained in England.

If the history of New England and Chesapeake colonies explains much of the intermingling of church and state that remained in the American states of 1791, where, then, did advanced notions about the separation of church and state, as embodied in the First Amendment, come from? Part of the answer is contained in the history of these vigorous establishments themselves. Such lonely voices as Roger Williams’s and momentary outbursts of toleration like the Maryland Act of 1649 did point, however feebly at the time, to what would follow. More direct support for non-traditional relations between church and state appeared in the colonies founded after the Restoration of Charles II in 1660.

Please read the rest there. If you are interested, the book from which this excerpt is taken is available for free digital download:

During July, Eerdmans is pleased to offer The Old Religion in a New World as Logos Bible Software’s Free Book of the Month. Grab your Logos digital copy before this special offer expires.
Posted by Stephanie A. Mann at 12:30 AM