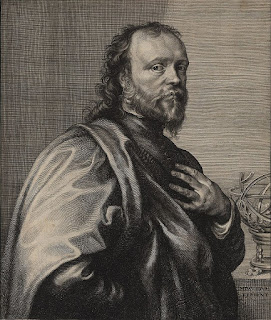 Kenelm Digby, Catholic convert and son of one of the Gunpowder plotters, was born on July 11, 1603--almost three years before his father's execution. From Cambridge University:

A dark shadow lay over his family name when, aged 24, Sir Kenelm Digby raised a fleet to sail against the enemy French in the multicultural world of the Mediterranean. In his new book, Joe Moshenska (Faculty of English) looks at the intellectual, political and culinary life of a man driven by a thirst for knowledge. . . . 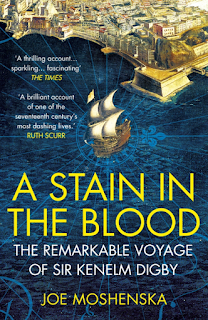 Sailing south in January 1628, Digby left behind a beloved wife and two sons, the youngest just a few weeks old. He was a man on the make. Despite being well-connected and highly educated, he had a black mark against his name. His father, Everard Digby, had been hung for treason against the crown. Revealed to be a co-conspirator in the Gunpowder Plot, Everard was subjected to the most grisly of executions. In front of approving crowds, his heart was ripped out and his genitals sliced off.

Everard Digby maintained his dignity right up to the moment he lost consciousness. He professed that he “deserved the vilest death” and made an impassioned plea that wife and sons not be punished for his crime. Everard’s fortitude became legendary but his family lived with a sense of disgrace. The blood stain in the title of Moshenska’s book is a reference to a wound cut deep into a man with an extraordinary thirst for knowledge and experiences.

Seventeenth century England was layered in complexity. Raised as a gentleman and a Roman Catholic in a country that had officially broken its ties with Rome, Kenelm Digby learned early on to tread a delicate line between faith, politics and expediency. As a practising Catholic student at Oxford, he was unable to “weare a gowne” (matriculate) and each November endured the bonfire celebrations that reminded him of his father’s death. But Digby had friends in high places and the means to travel.

Trips to Europe, the first when he was aged just 14, helped Digby to develop the worldly ease and diplomatic skills so vital to him later in life. In Italy, his nimble mind won admiration in philosophical debates. In France, his handsomeness gained the (embarrassing) attention from the older and powerful Queen Regent. Visiting Spain, he socialised with the future Charles I – and became dangerously entangled in negotiations for a royal marriage bringing two disparate nations together.

The single voyage that allowed Digby to establish himself as a loyal subject was almost derailed by those who sought to discredit him as papist. The 1620s saw England engaged in an expensive war with its Roman Catholic neighbours. When he finally got the commission he sought from the king, it gave him permission to sail wherever he chose and to take as prizes any ships belonging to enemies of England. He was empowered to undertake any action “tending to the service of the realm and the increase of his knowledge”.

More about the book here; looks fascinating!
Posted by Stephanie A. Mann at 12:30 AM