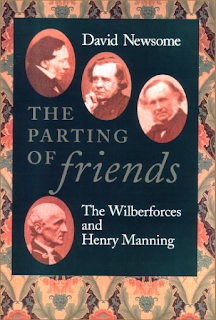 Henry Cardinal Manning, the second Archbishop of Westminster, is one of the famous converts who became Catholic through the influence of Newman in the Oxford Movement. He and Newman had a rather contentious relationship during their Catholic years. The story of his conversion is told in David Newsome's The Parting of Friends: The Wilberforces and Henry Manning.

James Hope-Scott, on the other hand, was a most faithful friend and defender of Newman. He was a barrister and represented Newman during the Achilli trial. More on his life from the Catholic Encyclopedia:

third son of the Honourable Sir Alexander Hope, G.C.B., who was fourth son of John, second Earl of Hopetoun, a Scottish title dating from 1703. His mother was third and youngest daughter of George Brown of Ellerton, Roxburghshire. During early childhood his home was the Military College at Sandhurst, where his father was in command. Afterwards he went abroad with his parents, staying in succession at Dresden, Lausanne, and Florence, and thus gaining a mastery of the German, French, and Italian tongues. In 1825 he entered Eton, whence, in 1828, he matriculated at Christ Church, Oxford. After a visit to Paris in 1829 he went into residence at Oxford the same year. The degree of B.A. he took in 1832, coming out in the fourth class in literis humanioribus. Next year he was elected a Fellow of Merton. In 1835 he gave up his intention of entering the ministry of the Established Church, and began to study law under conveyancers, his call to the bar at the Inner Temple taking place in 1838. Meanwhile, in the latter year he graduated B.C.L. at Oxford, proceeding D.C.L. in 1843. In 1838, after publishing anonymously in pamphlet form a letter to the Archbishop of Canterbury, he saw through the press Gladstone's work entitled "The State considered in its Relations with the Church". Next year he and Roundell Palmer (the future Earl of Selborne) projected "The History of Colleges". In 1840, at Newman's request, Hope wrote in "The British Critic", a review, later published separately, of Ward's translation of "The Statutes of Magdalen College, Oxon." The same year, as junior counsel for the capitular bodies petitioning against the Ecclesiastical Duties and Revenues Bill, he delivered the remarkably able speech which moved Brougham to exclaim, "That young man's fortune is made." In 1840, moreover, he was appointed Chancellor of the Diocese of Salisbury, which post he held until 1845. About the same time he took part in the foundation of Glenalmond College, in Perthshire, for the education of the Scottish Episcopal youth. In 1840-41 he spent some eight months in Italy, Rome included, in company with his close friend Edward Louth Badeley. On his return he became, with Newman, one of the foremost promoters of the Tractarian movement at Oxford. His next publication was a pamphlet against the establishment of the Anglo-Prussian Protestant See of Jerusalem, of which a second edition appeared in 1842. In 1849 and 1850 there came the Gorham trial and judgment, and in the latter year the agitation against the so-called "Papal Aggression". These events finally determined him upon the course of joining the Catholic Church, into which, together with Archdeacon Manning, he was received in London in 1851 by the Jesuit Father Brownhill.

In 1852 he managed Newman's defence in the libel action brought against him by Achilli, and in 1855 he conducted the negotiations which ended in Newman's accepting the rectorship of the Catholic University of Ireland. As to Hope's professional work, within a few years of his call he devoted himself wholly to parliamentary practice, in which his success and emoluments became prodigious. This was the palmy period of railway construction, and eventually he became standing counsel to almost every railway in the realm. In 1849 he was appointed Q.C., with a patent of precedence.

How he came to change his name:

His first wife, whom he married in 1847, was Charlotte Harriet Jane Lockhart, only daughter of John Gibson Lockhart and granddaughter of Sir Walter Scott. She soon followed her husband into the Catholic Church. A year later he became tenant of Abbotsford to his brother-in-law, and on the latter's death, in 1853, its possessor in right of his wife, thereupon assuming the name of Hope-Scott. Not long afterwards he added a new wing to Sir Walter's mansion. In 1855 he bought the Highland estate of Dorlin, whereupon he built a new house, selling the whole to Lord Howard of Glosson in 1871. In 1858 he had to mourn the loss of his wife, who died in childbed, the newborn child dying shortly after, and Walter Michael, his infant son and heir, before the close of the year. His second wife, whom he wedded in 1861, was Lady Victoria Alexandrina Fitzalan- Howard, eldest daughter of the fourteenth Duke of Norfolk, of whose children Hope-Scott had been left guardian. In 1867 he had the honour of a visit from Queen Victoria at Abbotsford, and in the same year he bought a villa at Hyères, in Provence. Like her predecessor, his second wife died in childbed in 1870, after giving birth to James Fitzalan Hope, now (1909) M.P. Hope- Scott never overcame the grief and shock entailed by this last bereavement. He now withdrew from his profession, surviving his dead wife but little more than two years, and dying in 1873. His funeral sermon was preached by his old and intimate friend Cardinal Newman in the same Jesuit church of Farm Street in which, two and twenty years back, Hope-Scott had made his submission to the Catholic Church. His charities and benefactions were wellnigh boundless. It is reckoned that from 1860 onwards he spent £40,000 in hidden charity. Among his innumerable good works, he built at a cost of £10,000 the Catholic church at Galashiels, near Abbotsford, and he was the chief benefactor of St. Margaret's Convent, at Edinburgh, wherein he lies buried.

More about him at Abbotsford here.

At his funeral, Newman praised him for his "tender conscience", his generosity, his talents and gifts as a barrister and advocate, and then concluded:

O happy soul, who hast loved neither the world nor the things of the world apart from God! Happy soul, who, amid the world's toil, hast chosen the one thing needful, that better part which can never be taken away! Happy soul, who, being the counsellor and guide, the stay, the light and joy, the benefactor of so many, yet hast ever depended simply, as a little child, on the grace of thy God and the merits and strength of thy Redeemer! Happy soul, who hast so thrown thyself into the views and interests of other men, so prosecuted their ends, and associated thyself in their labours, as never to forget still that there is one Holy Catholic Roman Church, one Fold of Christ and Ark of salvation, and never to neglect her ordinances or to trifle with her word! Happy soul, who, as we believe, by thy continual almsdeeds, offerings, and bounties, hast blotted out such remains of daily recurring sin and infirmity as the sacraments have not reached! Happy soul, who, by thy assiduous preparation for death, and the long penance of sickness, weariness, and delay, has, as we trust, discharged the debt that lay against thee, and art already passing from penal purification to the light and liberty of heaven above!

And so farewell, but not farewell for ever, dear James Robert Hope Scott! He is gone from us, but only gone before us. It is for us to look forward, not backward. We shall meet him again, if we are worthy, in "Mount Sion, and the heavenly Jerusalem," in "the company of many thousands of angels, the Church of the first-born who are written in the heavens," with "God, the Judge of all, and the spirits of the just made perfect, and Jesus, the Mediator of the New Testament, and the blood which speaketh better things than that of Abel."
Posted by Stephanie A. Mann at 12:30 AM