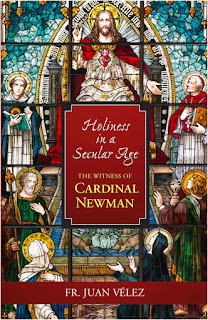 Father Juan Velez kindly sent me a review copy of his new book, Holiness in a Secular Age: The Witness of Cardinal Newman, published by Scepter. I'm about two-thirds through the book, which serves as an excellent introduction to Newman's life, projects, and works, exploring his educational projects especially--not the just The Idea of a University, but the practical experience Newman had teaching and administering education at Oxford, in Dublin, and at the Oratory School.

In the course of describing Blessed John Henry Newman's affinity for friendship, Father Velez mentions the first Bishop of Omaha, Nebraska, James O'Connor, whom he met at the Propaganda Fide in Rome while studying for the priesthood. I wondered why an American bishop would be studying in Rome, but then discovered with a little research that Bishop O'Connor was born in Ireland, came to the United States, studied at St. Charles Seminary in Philadelphia, and then went to the Propaganda College in Rome, where he was ordained in 1848. Then he became the first bishop of the Diocese of Omaha:

During Bishop O’Connor’s administration, many of Omaha’s older parishes were founded and the Franciscan Fathers arrived in the area.

After the Creighton family gave Bishop O’Connor the college they had endowed, Creighton University was entrusted to the Society of Jesus in 1878.

According to the Catholic Encyclopedia, then Father O'Connor returned to the United States after ordination:

The following year he was appointed rector of St. Michael's Seminary, Pittsburgh, and in 1862 rector of St. Charles's Seminary, Overbrook, Pennsylvania. In 1872 he was appointed pastor of St. Dominic's Church, Holmesburg, Pennsylvania. In 1876 he was appointed Vicar Apostolic of Nebraska, and on 20 August of the same year he was consecrated titular Bishop of Dibona by Bishop Ryan of St. Louis. During his episcopate the vicariate developed with wonderful rapidity. The construction of the Union Pacific Railway in 1867, and more especially the extension of the Burlington Railway in the seventies and eighties, opened up Nebraska to colonists, and white settlers began to pour in from the Eastern states. It became the duty of the new vicar to provide for the growing needs of the faithful, and the yearly statistics of the vicariate show how successful were his labours.

When he was consecrated " titular Bishop of Dibona", that was like a holding place designating a mission territory where no established diocese yet exists. It would be fascinating to read some of the letters between Newman and Bishop O'Connor! I don't have ready access to those letters, but I wonder if they corresponded about issues of university education, since Bishop O'Conner was involved in the establishment of Creighton University.
Posted by Stephanie A. Mann at 12:30 AM