The Tenth Anniversary of "Summorum Pontificum" 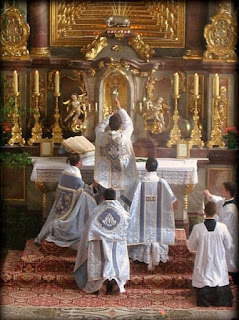 Today is the tenth anniversary of Pope Benedict XVI's Motu proprio Summorum Pontificum. It's wonderfully appropriate that I'll be able to celebrate this anniversary today by attending daily Mass in the Extraordinary Form of the Latin Rite at noon at my home parish, Blessed Sacrament, here in Wichita, Kansas. My husband and I attend EFLR Masses often when they are offered and have benefited spiritually from the reverence and the silence during the celebration of the Paschal Mystery. In many ways, that reverence and silence aids in our fuller participation in the Sacrifice of the Mass, and also in our celebration of the Mass in the Ordinary Form.

Robert Cardinal Sarah spoke about the implementation of Benedict's Motu proprio and the very real problems in Catholic worship that it addresses at a colloquium in Germany earlier this year:

Certainly, the Second Vatican Council wished to promote greater active participation by the people of God and to bring about progress day by day in the Christian life of the faithful (see Sacrosanctum Concilium, n. 1). Certainly, some fine initiatives were taken along these lines. However we cannot close our eyes to the disaster, the devastation and the schism that the modern promoters of a living liturgy caused by remodeling the Church’s liturgy according to their ideas. They forgot that the liturgical act is not just a PRAYER, but also and above all a MYSTERY in which something is accomplished for us that we cannot fully understand but that we must accept and receive in faith, love, obedience and adoring silence. And this is the real meaning of active participation of the faithful. It is not about exclusively external activity, the distribution of roles or of functions in the liturgy, but rather about an intensely active receptivity: this reception is, in Christ and with Christ, the humble offering of oneself in silent prayer and a thoroughly contemplative attitude. The serious crisis of faith, not only at the level of the Christian faithful but also and especially among many priests and bishops, has made us incapable of understanding the Eucharistic liturgy as a sacrifice, as identical to the act performed once and for all by Jesus Christ, making present the Sacrifice of the Cross in a non-bloody manner, throughout the Church, through different ages, places, peoples and nations. There is often a sacrilegious tendency to reduce the Holy Mass to a simple convivial meal, the celebration of a profane feast, the community’s celebration of itself, or even worse, a terrible diversion from the anguish of a life that no longer has meaning or from the fear of meeting God face to face, because His glance unveils and obliges us to look truly and unflinchingly at the ugliness of our interior life. But the Holy Mass is not a diversion. It is the living sacrifice of Christ who died on the cross to free us from sin and death, for the purpose of revealing the love and the glory of God the Father. Many Catholics do not know that the final purpose of every liturgical celebration is the glory and adoration of God, the salvation and sanctification of human beings, since in the liturgy “God is perfectly glorified and men are sanctified” (Sacrosanctum Concilium, n. 7). Most of the faithful—including priests and bishops—do not know this teaching of the Council. Just as they do not know that the true worshippers of God are not those who reform the liturgy according to their own ideas and creativity, to make it something pleasing to the world, but rather those who reform the world in depth with the Gospel so as to allow it access to a liturgy that is the reflection of the liturgy that is celebrated from all eternity in the heavenly Jerusalem. As Benedict XVI often emphasized, at the root of the liturgy is adoration, and therefore God. Hence it is necessary to recognize that the serious, profound crisis that has affected the liturgy and the Church itself since the Council is due to the fact that its CENTER is no longer God and the adoration of Him, but rather men and their alleged ability to “do” something to keep themselves busy during the Eucharistic celebrations.

One thought I have when I attend the EFLR is that this is the ritual of the Mass for which William Byrd wrote his three Masses and his Gradualia; this is the Mass that St. Edmund Campion, St. John Southworth, St. Oliver Plunkett, Blessed John Cornelius, Blessed Thomas Maxfield and so many others learned to say in exile and brought back to England. This is the form of the Mass that English laymen and laywomen risked their lives to attend.

Thank you, Pope Benedict XVI! Thank you to all the priests in our diocese who have offered the EFLR to our Latin Mass Community in the Catholic Diocese of  Wichita, Kansas!!

Image Credit: from Wikipedia Commons, by the Priestly Fraternity of Saint Peter, available from http://fssp.org.
Posted by Stephanie A. Mann at 12:30 AM