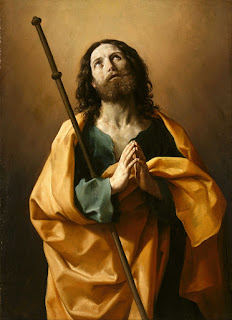 In honor of the Feast of St. James the Greater, some words about the Cluniac Priory of St. James in the West Midlands founded by Gervase Paganell in honor of St. Thomas of Canterbury, according to Gervase's father's wishes. Paganell was the First Lord Dudley, but he rebelled against Henry II during the Great Revolt of Henry's sons in 1173-74 and never returned to his castle after Henry had it destroyed. This website for the Friends of Dudley Castle describes how the Cluniac monks took over the role of the feudal lord in the nearby community:

For 50 years the barons stayed away from Dudley and the Prior of St James took on the responsibility of running the town's civil and religious life. Gervase had just founded the Borough (town) and being new it was a little unsteady in its development. The Prior being a scholarly man helped it to get through these early problems. As every market town had at least one annual fair he got permission to hold one in Dudley on July 15th. This was St James Day, the Apostle that the Priory was dedicated to. Close to where the fountain stands today, stocks were built. These were a wooden contraption in which to lock up people who were not law-abiding. Just to remind the market people God was always watching them a stone cross stood next to the stocks.

Thanks to this help the town began to grow and prosper but it was in other ways that the Priory helped with the town's growth. Medieval society was not one in which much thought was given to protecting peoples welfare. The church began to take on this role. The monks built a hospital (on the west range of the cloister, next to the great west door). In those days hospitals were not only for the sick. One role it took was a place where travellers could have a bed for the night and a meal, (normally free of charge). Another was a place where old people could retire, (they would help pay for this by handing over their property to the monks). But of course there was a place for the sick and a monk (like Brother Cadmon in the fictional stories) was a herbalist who made medicines. Given the knowledge at the time many of these people were terminal cases and a small part of the building was reserved for the dying. It was a small, quiet room with paintings on the walls of the various saints who would protect the person on his/her entering the next world. 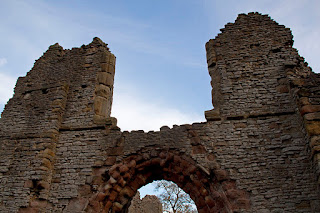 Please read the rest there. The ruins are of course picturesque, and this news story describes how an app can help visitors understand the background of Priory Park, in which they are situated. Yes, there's an app for that; more information about Priory Park here.

When the Priory was suppressed by Henry VIII, John Dudley, later the Duke of Northumberland received the buildings and land. When was executed in 1553, the Priory buildings fell into disrepair.

Email ThisBlogThis!Share to TwitterShare to FacebookShare to Pinterest
Labels: Cluniac Houses, St. James the Greater, The Dissolution of the Monasteries, the Dudley Family