Looking Forward to the Weekend 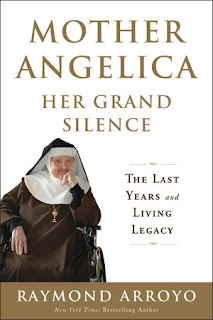 Inspired by Raymond Arroyo's Facebook announcement of a good deal on the eBook, I purchased the final installment of his biography his former boss: Mother Angelica: Her Grand Silence: The Last Years and Living Legacy. (Available for a limited time only at the special price.)

As he notes, EWTN fades to the background as Mother Angelica resigns as CEO of her broadcast empire and then after she suffers a stroke that leaves her speechless. She also has to retire as the Abbess of her community after a trip to Japan during which she is severely injured and ends up bedridden. There is a struggle for leadership and control within her community, the Poor Clares of Perpetual Adoration, between two sisters. Eventually, both of them leave the community, other sisters left Hanceville, Alabama to found new houses of Poor Clares, the number of postulants decreases, and the community merges with another house of Poor Clares from Charlotte, North Carolina, whose Abbess becomes the leader of the combined house in Hanceville.

Some reviewers (as you may see on Amazon.com) don't like Arroyo airing this "dirty laundry". They think it reflects poorly on Mother Angelica. Canonized saints like St. Alphonsus Liquouri and St. Francis of Assisi have endured struggles in their community, maintaining their vision, and even their influence in the orders they've founded. When her cause for canonization opens in a few years, her faithfulness and suffering will be the foundation of the declaration that she is a Servant of God.

In the course of this book, Arroyo details Mother Angelica's physical sufferings and the dutiful care her sisters give her inside the cloistered convent. He also provides details of reports of spiritual manifestations, visions, and attacks of the devil. Arroyo includes excerpts from the many letters received attesting to her influence on the lives of viewers and listeners to EWTN, where her old series are still rerun. He dedicates a chapter to how he worked for Mother Angelica and how she influenced him. The last chapter describes her very last days of agony during the Holy Week of 2016. The book exhibits great transparency and honesty about her love of God, her faithfulness to His inspirations, and her personality.

I have to admit that her story and her written works have appealed to me much more than her broadcast appearances, her old shows that EWTN airs on television and radio. Arroyo explains her importance for Catholics in the United States and around the world faithfully and loyally.
Posted by Stephanie A. Mann at 12:30 AM