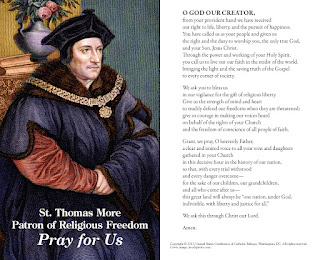 "Blessed Thomas More is important today, but he is not as important now as he will be in one hundred years from today", G.K. Chesterton said in 1929.

He was only 17 years off. The United States Conference of Catholic Bishops has chosen St. Thomas More as a Patron of Religious Freedom and used his visage on a holy card with a prayer for religious freedom. There might be some historical difficulty there, however, since Thomas More, as Chancellor of England enforced the heresy laws as Henry VIII intended. England had heresy laws on the books from the Lollard era (first passed as law in 1401 during the reign of Henry VI); More, like most of his contemporaries, had no idea of religious plurality or of absolute religious freedom. Like Henry VIII, More believed that the State had a role in defending religious truth and thus, in his brief tenure as Chancellor, he enforced the heresy laws.
Blessed John Paul II might have thought Chesterton was about 29 years off, because he proclaimed St. Thomas More the Patron Saint of Statesmen and Politicians in the year 2000:

There are many reasons for proclaiming Thomas More Patron of statesmen and people in public life. Among these is the need felt by the world of politics and public administration for credible role models able to indicate the path of truth at a time in history when difficult challenges and crucial responsibilities are increasing. Today in fact strongly innovative economic forces are reshaping social structures; on the other hand, scientific achievements in the area of biotechnology underline the need to defend human life at all its different stages, while the promises of a new society — successfully presented to a bewildered public opinion — urgently demand clear political decisions in favour of the family, young people, the elderly and the marginalized.

In this context, it is helpful to turn to the example of Saint Thomas More, who distinguished himself by his constant fidelity to legitimate authority and institutions precisely in his intention to serve not power but the supreme ideal of justice. His life teaches us that government is above all an exercise of virtue. Unwavering in this rigorous moral stance, this English statesman placed his own public activity at the service of the person, especially if that person was weak or poor; he dealt with social controversies with a superb sense of fairness; he was vigorously committed to favouring and defending the family; he supported the all-round education of the young. His profound detachment from honours and wealth, his serene and joyful humility, his balanced knowledge of human nature and of the vanity of success, his certainty of judgement rooted in faith: these all gave him that confident inner strength that sustained him in adversity and in the face of death. His sanctity shone forth in his martyrdom, but it had been prepared by an entire life of work devoted to God and neighbour.

Referring to similar examples of perfect harmony between faith and action, in my Post-Synodal Apostolic Exhortation Christifideles Laici I wrote: "The unity of life of the lay faithful is of the greatest importance: indeed they must be sanctified in everyday professional and social life. Therefore, to respond to their vocation, the lay faithful must see their daily activities as an occasion to join themselves to God, fulfil his will, serve other people and lead them to communion with God in Christ" (No. 17).

This harmony between the natural and the supernatural is perhaps the element which more than any other defines the personality of this great English statesman: he lived his intense public life with a simple humility marked by good humour, even at the moment of his execution.

This was the height to which he was led by his passion for the truth. What enlightened his conscience was the sense that man cannot be sundered from God, nor politics from morality. As I have already had occasion to say, "man is created by God, and therefore human rights have their origin in God, are based upon the design of creation and form part of the plan of redemption. One might even dare to say that the rights of man are also the rights of God" (Speech, 7 April 1998).

And it was precisely in defence of the rights of conscience that the example of Thomas More shone brightly. It can be said that he demonstrated in a singular way the value of a moral conscience which is "the witness of God himself, whose voice and judgment penetrate the depths of man’s soul" (Encyclical Letter Veritatis Splendor, 58), even if, in his actions against heretics, he reflected the limits of the culture of his time.

In the Constitution Gaudium et Spes, the Second Vatican Council notes how in the world today there is "a growing awareness of the matchless dignity of the human person, who is superior to all else and whose rights and duties are universal and inviolable" (No. 26). The life of Saint Thomas More clearly illustrates a fundamental truth of political ethics. The defence of the Church’s freedom from unwarranted interference by the State is at the same time a defence, in the name of the primacy of conscience, of the individual’s freedom vis-à-vis political power. Here we find the basic principle of every civil order consonant with human nature.

5. I am confident therefore that the proclamation of the outstanding figure of Saint Thomas More as Patron of Statesmen and Politicians will redound to the good of society. It is likewise a gesture fully in keeping with the spirit of the Great Jubilee which carries us into the Third Christian Millennium.

Therefore, after due consideration and willingly acceding to the petitions addressed to me, I establish and declare Saint Thomas More the heavenly Patron of Statesmen and Politicians, and I decree that he be ascribed all the liturgical honours and privileges which, according to law, belong to the Patrons of categories of people.

Blessed and glorified be Jesus Christ, the Redeemer of man, yesterday, today and for ever.

Given at Saint Peter’s, on the thirty-first day of October in the year 2000, the twenty-third of my Pontificate.

Remember that Margaret Giggs Clement, one of St. Thomas More's wards, died 35 years after his execution in Mechelen, now Belgium, where the More family had gone in exile during the reign of Elizabeth I.
Posted by Stephanie A. Mann at 12:03 AM