A Tea at Trianon Review 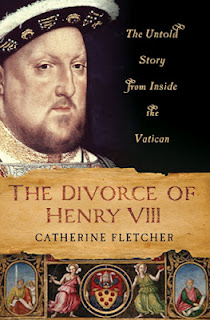 The Divorce of Henry VIII (UK title: Our Man in Rome) by Professor Catherine Fletcher of Durham University is an indispensable addition to the library of any serious scholar of Tudor history. I say "serious" scholar because, while the book is not overlong, it is not light reading. It might be challenging for some to keep track of all the various players and intertwining events unless one is already deeply immersed in the politics of the King's Great Matter. However, after glancing at the author's extensive bibliography, I must commend her for being able to concentrate so much detailed research into one volume. It includes material rarely covered by other works about Henry VIII, shedding light on the fascinating world of sixteenth century ambassadors.

The narrative centers on the adventures of the Casali family of Rome whose sons made a living by working as diplomats for various princes, both local and foreign. The complicated inner workings of Renaissance Italian politics are beyond modern imagination; compared to those Renaissance rascals most Americans do not know the meaning of intrigue. Growing up in a diplomatic and political scenario was helpful for those who wished to have a career in statecraft; it all depended on whom you knew and how well. Gregorio Casali was employed by Henry VIII to represent his case before the Pope. Now getting in to see the Pope, even for the ambassador of a king, was not always an easy matter. Bribes were usually necessary and what made the difference between a good ambassador and a sloppy one was knowing whom to bribe. . . .