Henry VIII attainted Thomas Cromwell, whom he'd just created the Earl of Essex in April of 1540 and condemned him to the traitor's death of being drawn, hung, and quartered on July 28, 1540. Henry regretted this execution just a few months later, which he had commuted to beheading, soon after he got rid of one of his better servants. Cromwell was accused of various crimes, but the true cause was the marriage he'd arranged between Henry VIII and Anne of Cleves. According to this site, he was accused/found guilty of:

~Releasing men convicted or suspected of treason
~Misusing and expropriating funds
~Taking bribes
~Making appointments without royal approval
~Being a “detestable heretic” who had spread heretical literature throughout the kingdom
~Being a “maintainer and supporter" of heretics
~Speaking treasonable words – When preachers like Robert Barnes had been reported to him, Cromwell had said: “If the king would turn from it, yet I would not turn; and if the king did turn, and all his people, I would fight in the field in mine own person, with my sword in my hand against him and all other” and “if I live one year or two, it shall not lie in the king’s power to resist or let it if he would”1.
~That he was a sacramentary, a supporter of Zwingli and someone who denied the real presence of Christ in the sacrament.

(Please note that Robert Barnes and being a supporter of Zwingli will come up again in just two days!)

Cromwell had been arrested in June, stripped of all his titles, and held in the Tower of London; he wrote letters to Henry VIII protesting his innocence, but he had fallen victim to the machine of injustice he had helped his master construct. Henry VIII's distaste for Anne of Cleves was matched by his desire for Catherine Howard, so he arranged the annulment of the first marriage (July 9), his marriage to Catherine, and the execution of Thomas Cromwell accordingly--he married Catherine the same day at Oatlands Palace in Surrey that Cromwell was beheaded on Tower Green in London. He had designated Oatlands Palace as Anne of Cleves' residence--just to add to the completion of Henry's triumph over this arranged marriage. 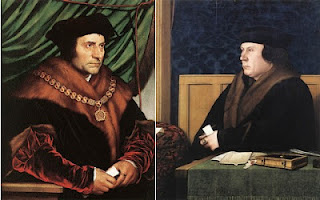 As at the Frick Museum in New York, Thomas More and Thomas Cromwell are often opposed: the former a defender of the Catholic Church and her doctrine and worship, the latter the Vice Regent in Spirituals of the new Supreme Head and Governor of the Church in England, destroying many of the outward signs of Catholicism, etc. Cromwell assisted in the dividing of Christians, which action does not match Jesus's prayer to His Father in Heaven that all would be one in Him as He is one with the Father (John 17:21) , and he destroyed a material and spiritual culture of beauty and depth. Unlike Hilary Mantel, I see no reason to malign Thomas Cromwell (as she maligned Thomas More)! Nevertheless, I find this kind of special pleading for Thomas Cromwell from a New Yorker review of Wolf Hall just as bad as special pleading for Thomas More re: the six heretics whose trial and execution he oversaw:

. . . the eminent British historian G. R. Elton had begun claiming, in successive writings on the Tudors, that Cromwell wasn’t so bad. Under him, Elton wrote, English political policy, formerly at the whim of the nobles, became the work of specialized bureaucracies. England thereby progressed from the Middle Ages into the modern period, and you can’t make that kind of revolution without breaking eggs. Elton’s research revealed, furthermore, that under Cromwell only about forty people per year were killed in the service of the Crown’s political needs. That’s a pretty cheap omelette.

Unless you or your loved one is the egg. If we are going to impose our 21st century morality on the 16th century, let's try to find some consistency. If each human person and his or her freedom from injustice is a moral absolute--just to pick a standard--then don't excuse the death of forty people a year sacrificed for the sake of progress, however defined. (From nobles to bureaucrats! What a revolution!)