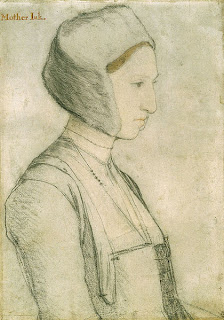 Margaret Giggs Clement, ward of St. Thomas More, died in Mechelen, Belgium on July 6, 1570. She and her husband, Dr. John Clement, lived in the Low Countries in exile from Elizabethan England. She was one of the most learned women of the Renaissance, having benefitted from the fine education Thomas More thought the girls, as well as the boys, in his household should receive. She studied Galen for example and her treatment helped More recover from a tertian fever.

This site provides details of her care for the Carthusians of the London Charterhouse in Newgate Prison and the mystical experience she had on her deathbed, according to her daughter's account:
But the time had now come that God had appointed to reward her for her good works done to the Fathers of the Charterhouse. He visited her with an ague which held her nine or ten days, and having brought her very low and in danger, she received all the sacraments with great devotion, and being desirous to give her blessing to all her children who were all present except her Religious daughters and one more that remained at Bruges with her husband, she caused her to be sent for in all haste. Wednesday being now come, which was the last day before she died, and asking if her daughter were come, and being told no, but that they looked for her every hour, she made answer that she would stay no longer for her, and calling her husband she told him that the time of her departing was now come, and she might stay no longer, for there were standing about her bed the Reverend Fathers, Monks of Charterhouse, whom she had relieved in prison in England and did call upon her to come away with them, and that therefore she could stay no longer, because they did expect her, which seemed strange talk unto him. Doubting that she might speak idly by reason of her sickness, he called unto her ghostly Father, a Reverend Father of the Franciscans living in Mechlin, to examine and talk with her, to whom she constantly made answer that she was in no way beside herself, but declared that she still had the sight of the Charterhouse monks before her, standing about her bedside and inviting her to come away with them, as she had told her husband. At the which they were all astonished.
Margaret's daughter, also named Margaret, was the Prioress of the Convent of St. Ursula in Louvain--where Englishwomen, some of them daughters and sisters of Catholic martyrs (Ann Clitherow, Eleanor and Margaret Garnet) lived in exile.
Note also that Margaret Clement died on the 35th anniversary of her foster-father's martyrdom.
Posted by Stephanie A. Mann at 2:02 AM