In paperback: Eric Ives' The Reformation Experience: Life in the Turbulent Sixteenth Century. Per the publisher, Lion: 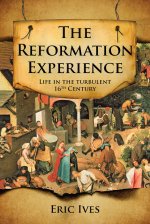 The Reformation was one of the most cataclysmic events in European history, which still has a powerful influence on events today. But what was it really like to live through the Reformation in England? How did people cope when some of their dearest beliefs were challenged, then reaffirmed, only to be challenged again? What happened to individuals and communities, as conflicting beliefs and loyalties drove them apart? In this fascinating study, Professor Ives shows the impact the Reformation had on individual Christians and what it meant to their lives. To what extent did people believe in the first place, and how much did they accept the new teaching? How did it change their behaviour, and their perspectives on both life and death? Reflecting the most recent scholarship and controversy, this book provides an important and gripping insight into ordinary people's thoughts and lives, and contrasts with the usual emphasis on the great figures of the Reformation. Eric Ives is Emeritus Professor of English History at the University of Birmingham, and an expert on the Tudor period. In 2001, he was awarded the OBE for his services to history. Among his books is the highly acclaimed Life and Death of Anne Boleyn, while his most recent, Jane Grey: a Tudor mystery has been described as 'essential provocative reading'.

On Kindle: G.W. Bernard's The Late Medieval English Church: Vitality and Vulnerability Before the Break from Rome. Per the publisher, Yale:

The later medieval English church is invariably viewed through the lens of the Reformation that transformed it. But in this bold and provocative book historian G. W. Bernard examines it on its own terms, revealing a church with vibrant faith and great energy. Bernard looks at the structure of the church, the nature of royal control over it, the clergy and bishops, the intense devotion and deep-rooted practices of the laity, anti-clerical sentiment, and the prevalence of heresy. He argues that the Reformation was not inevitable, nor made unavoidable by the defectiveness, corruption, superstition or outdatedness of a church ripe for a fall: the late medieval church had both vitality and vulnerabilities, the one often linked to the other. The result is a thought-provoking study of a church and society in transformation.
Posted by Stephanie A. Mann at 12:04 AM