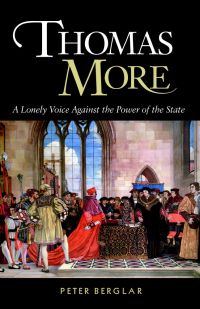 Subtitle: A Lonely Voice Against the Power of the State. From the publisher (Scepter):

This book explores the conscience and motivation of one of the most admired persons in history: St. Thomas More. Most people know that Thomas More wrote a book called Utopia about a perfect society and got his head chopped off by King Henry VIII. But there was much more to the man. More not only occupied England’s most powerful position under the king as Lord Chancellor, but was also a devoted family man, a Renaissance figure of renown throughout Europe, and the author of works of apologetics as well as poetry, fiction and plays. Even while awaiting execution in the Tower of London, his multi-volume “Tower writings” poured out, evidence of his deep faith and life of prayer.

In Gulliver’s Travels, Protestant author Jonathan Swift named More among the six greatest defenders of liberty of all time, “to which all the ages of the world cannot add a seventh.” Erasmus praised him as one “born, created for friendship.” After his death, a popular tune sang the praises of his “gentle heart”:

When More some time had Chancellor been,
No more suits did remain;
The like will never more be seen
Till More be there again.

Peter Berglar, who has written ten biographies including one of St. Peter, and one of the earliest studies of Opus Dei and its founder, St. Josemaría Escrivá, deals in this new translation of the original German with the ultimate question: for what is life not worth living? When must it be purchased at a price that could devalue and perhaps destroy it? “It has been repeated in every generation. There will never be a lack of idols and dictators who demand this sacrifice.”

Peter Berglar organizes his biography of St. Thomas More according to the epitaph More wrote for his tomb in Chelsea, and even sent a copy of to Erasmus, after he had left the service of Henry VIII as Chancellor:

"Thomas More, a Londoner born, of no noble family, but of an honest stock, somewhat brought up in learning; after that in his young days he had been a pleader in the laws of this hall certain years, being one of the under-sheriffs of London, was of noble King Henry the Eight (which alone of all kings worthily deserved both with sword and pen to be called the Defender of the Faith, a glory afore not heard of) called into the court, and chose one of the Council and made knight; then made first under-treasurer of England, after that chancellor of the Duchy of Lancaster, and last of all, with great favour of his prince, lord chancellor of England. But in the mean season, he was chosen speaker of the parliament, and besides was divers times in divers places the king's ambassador, and last of all at Cambray, joined fellow and companion with Cuthbert Tunstal, chief of that embassy, then Bishop of London, and within a while after Bishop of Durham, who so excelleth in learning, wit and virtue, that the whole world scant hath at this day any more learned, wiser or better; where he both joyfully saw and was present ambassador when the leagues between the chief princes of Christendom were renewed again, and peace so long looked for restored to Christendom, which peace Our Lord stablish and make perpetual.

When he had thus gone through this course of offices or honours, that neither that gracious prince could disallow his doings, nor he was odious to the nobility nor unpleasant to the people, but yet to thieves, murderers and heretics grievous, at last John More, his father, knight, and chosen of the prince to be one of the justices of the King's Bench, a civil man, pleasant, harmless, gentle, pitiful, just and uncorrupted, in years old, but in body more than for his years lusty, after that he perceived his life so long lengthened, that he saw his son lord chancellor of England, thinking himself now to have lived long enough, gladly departed to God. His son then, his father being dead, to whom as long as he lived being compared was wont both to be called young and himself so thought too, missing now his father departed, and seeing four children of his own, and of their offspring eleven, began in his own conceit to wax old; and this affection of his was increased by a certain sickly disposition of his breast, even by and by following, as a sign or token of age creeping upon him. He, therefore, irked and weary of worldly business, giving up his promotions, obtained at last by the incomparable benefit of his most gentle prince, if it please God to favour his enterprise, the thing which from a child in a manner always he wished and desired: that he might have some years of his life free, in which he little and little withdrawing himself from the business of this life, might continually remember the immortality of the life to come. And he hath caused this tomb to be made for himself, his first wife's bones hither too, that might every day put him in memory of death that never ceases to creep on him. And that this tomb made for him in his life-time be not in vain, nor that he fear death coming upon him, but that he may willingly, for the desire of Christ, die and find death not utterly death to him, but the gate of a wealthier life, help him, I beseech you, good reader, now with your prayers while he liveth, and when he is dead also."

Using that epitaph, which is More's outline of his own life's story to that point, Berglar traces More's career in the courts and at Court, his family life, and his involvement in the great crises of the Reformation and Henry VIII's Great Matter:

In the last chapter, Berglar explores More's relationships with his two wives, Jane and Alice, to whom More paid tribute in his Chelsea epitaph:


Within this tomb Jane, wife of More, reclines;
This More for Alice and himself designs.
The first, dear object of my youthful vow,
Gave me three daughters and a son to know;
The next—ah! virtue in a stepdame rare!—
Nursed my sweet infants with a mother's care.
With both my years so happily have past,
Which most my love, I know not—first or last.
Oh! had religion destiny allowed,
How smoothly mixed had our three fortunes flowed!
But, be we in the tomb, in heaven allied,
So kinder death shall grant what life denied.

In the second part, Berglar looks more closely at More's responses to those two crises mentioned above by examining his works, like Utopia and The Humble Supplication of Souls (defending Church teaching on Purgatory), his defense of Church teaching on the Holy Eucharist and other works against the Reformers (written at the request of the great Defender of the Faith), and the Tower Works, composed during the 445 days he spent as Henry VIII's prisoner:

This is an effective overview of More's life and works, with an interesting organizing pattern, and the reminder, especially highlighted in the epilogue, of the integrity of St. Thomas More's life. He thoroughly integrated his spiritual and professional life, his religious and personal life, so that there is no division or compartmentalization. Berglar notes when More may have failed in this effort (as when he followed Wolsey too closely) and does not ignore the difficulties and balance More had to work to achieve.

This book was translated from the German and the author notes in the epilogue the scarcity of German translations of More's works. Even though it is meant for a German audience, to bring St. Thomas More's example of responding to the crisis of the State attacking the Church, it's a good reminder for English and American audiences too, especially when discussing the distinctions between More and St. John Fisher:

"The difference between them was the difference between layman and priest. Fisher was obliged to resist the regime's aberrations directly. In this sense, his position was easier than More's. Priests who come into conflict with the state and wish to remain faithful to the Church will invoke St. John Fisheras their patron; whereas perplexed Christians entangled in the complexities and intrigues of the social apparatus and in need of an example and intercessor, will turn to St. Thomas More."

Fitting guidance for this Fortnight for Freedom in the U.S.A. (I purchased this book.)
Posted by Stephanie A. Mann at 12:17 AM