The Last Catholic Priest at Tyburn: An Irish Archbishop 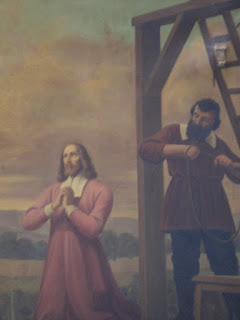 Oliver Plunkett, the Archbishop of Armagh in Ireland, was executed at Tyborn in London on July 1, 1681. He was the last priest to be executed there and the final victim of the "Popish Plot"--that fraudulent, perjured plot cooked up by the BBC's Worst Briton of the 17th Century: Titus Oates.

The Whigs in Parliament, opposed most of all to the succession of Charles II's Catholic brother, James the Duke of York, jumped at the opportunity to attack Catholics--and James--when Titus Oates fabricated the story of a great conspiracy. Charles II did not believe most of the elements of the plot Oates "revealed", especially when the perjuror implicated his own queen, Catherine of Braganza, and his brother.

St. Oliver Plunkett was born in 1629 in Loughcrew, County Meath, Ireland of well-to-do parents and studied for the priesthood at the Irish College in Rome. While Oliver Cromwell was inflicting the "righteous judgement of God" on the Irish who had rebelled against English rule during Charles I's reign, Plunkett had been unable to return to serve his people as a priest after ordination in 1654. He therefore remained in Rome and taught theology. In 1669 he was appointed the Archbishop of Armagh and the Primate of All Ireland and finally returned to Ireland the next year. For a time, Charles II's Restoration leniency allowed Plunkett to accomplish many reforms and reorganizations in education and catechesis. As Archbishop, he confirmed thousands (48,000!) but in 1673, persecution of Catholics in England's colony forced him to go into hiding and close the schools. Arrested in connection with Oates' plot, he was imprisoned at Dublin Castle. He was canonized by Pope Paul VI in 1975 and in 1997 he was named the Patron Saint of Peace and Reconciliation in Ireland. His trial and execution were so manifestly unfair that even Shaftesbury realized things had gone too far--yet, with the Popish Plot's true conspirators, Oates and companions, finally being mistrusted and the whole matter winding down, Charles II did nothing to stop the execution of St. Oliver Plunkett. This site contains a wealth of information, including the prayers and readings for a Mass honoring his Feast.
Posted by Stephanie A. Mann at 12:14 AM