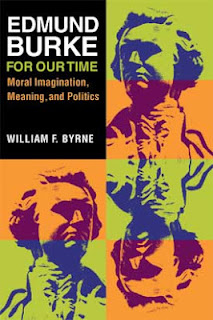 From an article in Crisis Magazine by William F. Byrne, Associate Professor of Government and Politics at St. John’s University (NY), and author of Edmund Burke for Our Time: Moral Imagination, Meaning, and Politics:

Burke’s own religious background is actually a matter of some controversy. He was an Irishman; his mother and sister were Catholic. Burke, his father, and his brothers were officially Anglican, but this was probably a reflection of the political realities of the time. Due to the severe challenges presented by the oppression of Irish Catholics, it was common in families for the women to be openly Catholic while the men were secretly Catholic but nominally Anglican. Burke’s father was a lawyer, and appears to have been one of many Catholic lawyers who “converted” to the Church of Ireland when Catholics were barred from the profession. At any rate, Burke spent much of his early youth with his Catholic cousins, then attended a Quaker school (schools for Catholics were illegal) and the Anglican Trinity College. . . .

For Burke, religion was the “first prejudice.” That is, religious presumptions are foundational to virtue, morality, and a good society. He celebrated the English tradition of “education by ecclesiastics,” believing that this fostered the right attitude and outlook in young men. Most notably, he emerged as a defender of England’s church establishment, believing that this discouraged “fraud and violence and injustice and tyranny” in government. He liked church-state linkage not for the benefit of the church, but as a way of conveying the idea that politics is a sacred trust. Burke had a deep sense of the sacred, and he understood that it is vital that we recognize that our whims—experienced either singly or collectively—do not set the standards of right and wrong. Church-state linkage helped to “consecrate” the state. . . .

Despite Burke’s defense of church establishment, he was also a supporter of religious liberty. And, he bitterly attacked the anti-Catholicism laws imposed on Ireland. Such laws were eroding Irish society, destroying social and cultural bonds and transforming the population into an atomized mob ripe for rebellion. Government attacks on new and minority churches were bad enough, but attacking the major, ancestral church of a society was deadly. He warned against the promotion of a generic “Protestantism” understood as anti-Catholicism, pointing out that an atheist, with his rejection of all Catholic doctrine rather than just portions of it, is “the most perfect Protestant.” In attacking Catholicism, government was attacking religion, piety, and, ultimately, society itself.