The King on Trial 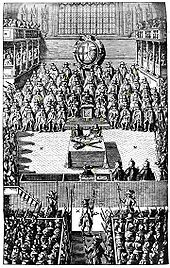 The trial of King Charles I began on January 20, 1649--a unique event. Not even King Louis XVI would be tried as monarch in the French Revolution; he was deposed and tried as Louis Capet: and he had defense counsel and knew the charges against him before the trial. Charles' grandmother had been deposed as Queen of Scotland when she was tried, and like him, Mary of Scotland protested against the grounds of the trial. She was not the subject of Elizabeth, Queen of England; she was an anointed and consecrated monarch (and that's why Elizabeth was concerned about the precedent set). How can one Queen commit treason against another Queen?

It's one thing to depose a king and murder him (as happened to Edward II, Richard II, and Henry VI), it's another thing to put him on trial when he is, according to the custom and the law, the source of law and justice in the land. With his high, divine right of kings view of his role in the British polity, Charles I would not recognize the Parliamentary Court and he would not plead or participate in the trial. Luckily for him, they did not sentence him to peinte et dure (pressing until he would plead one way or the other (remember St. Margaret Clitherow). But they did find his lack of plea an admission of guilt. He challenged the legality of the trial and the court on the first day of the proceedings:

I would know by what power I am called hither ... I would know by what authority, I mean lawful; there are many unlawful authorities in the world; thieves and robbers by the high-ways ... Remember, I am your King, your lawful King, and what sins you bring upon your heads, and the judgement of God upon this land. Think well upon it, I say, think well upon it, before you go further from one sin to a greater ... I have a trust committed to me by God, by old and lawful descent, I will not betray it, to answer a new unlawful authority; therefore resolve me that, and you shall hear more of me.

I do stand more for the liberty of my people, than any here that come to be my pretended judges ... I do not come here as submitting to the Court. I will stand as much for the privilege of the House of Commons, rightly understood, as any man here whatsoever: I see no House of Lords here, that may constitute a Parliament ... Let me see a legal authority warranted by the Word of God, the Scriptures, or warranted by the constitutions of the Kingdom, and I will answer.

As this attorney notes,

The trial of King Charles I was, by legal standards, a rather discreditable affair. The "Court" had no legal authority. It was the creature of the power of the army. The King had no advance notice of the charge. No one was appointed to help him with his defence. The court did not even pretend to be impartial. When the King scored a point in argument, the soldiers around the Hall showed where the real power lay. . . .

The King was denied the chance to appeal to a true Parliament, the only body that might have been relevant in his case. His deprivation of liberty, and ultimately of his life, was by the power of a purported Parliament and not by a procedure established by law. He was not informed at the time of his arrest of the charges against him. Indeed, until the trial began, he was not informed of the precise accusations. Nor was he brought promptly before a judge or other officer authorised by law to exercise the judicial power. Instead, he was kept in close custody in successive isolated places of detention whilst his accusers decided what they would do with him. He had no access to a court to invoke the Great Writ to secure his liberty. Although he was treated with courtesy and dignity, he was not treated with humanity. He was kept away from his family, friends and advisers. He was surrounded by guards, informers and pimps engaged by the army for surveillance.

Charles I spoke as much as he could at trial to warn the people that the precedent set by this trial guaranteed further injustices--and the royalists left behind would discover that he was right.
Posted by Stephanie A. Mann at 2:19 AM