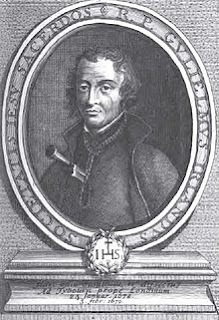 William Ireland (1636-1679) worked for 10 years in Flanders, waiting to return to his native England. When he was finally able to do so, he served as procurator (responsible for finances) for only one year before he became the first victim of the infamous Titus Oates plot. Ireland studied at the English College at Saint-Omer, Flanders, and entered the Jesuit novitiate at age 19. After studying theology at Liège, he was ordained in 1667. For the next decade he taught at his alma mater and was confessor to the Poor Clares at Gravelines. Finally, he was able to return to England in June 1677 and settled in London where he used the alias "Ironmonger" while he cared for the financial affairs of the Jesuit mission.

Titus Oates was a renegade Anglican minister who hated the Society of Jesus. Along with another minister, Israel Tonge, he invented a story that the English Jesuits planned to assassinate King Charles II, overthrow the government and its established religion and reinstate Catholicism. This fabricated tale raised an angry furor and led to a renewed persecution of Catholics. Among the first to suffer was Father Ireland who was arrested along with Father John Fenwick and their lay assistant, Mr. John Grove. They were imprisoned in the Newgate and burdened with heavy chains that rubbed the flesh on their legs raw. After three months, Ireland and his companions came to trial on Dec. 17, 1678; along with them were Fr. Thomas Whitbread and Thomas Pickering, a Benedictine brother.

At the trial Titus Oates testified that he had been present at a meeting of Jesuits in April that year and listened to plans being made to murder the king. He claimed that Ireland, Fenwick and Grove were present at the meeting, while Whitbread and Pickering had been assigned to carry out the murder. According to Oates, Ireland had been seen loitering about the royal residence during August; an attempt would have already been made but Pickering's pistol failed three times to fire. A second witness agreed with most of the testimony. Ireland had witnesses to prove that he was in the Midlands and North Wales at the time he was alleged to have loitered about the royal palace. To contradict him, Oates bribed a maid to say she had seen him in London at that time. On the basis of the false testimony, Ireland, Grove and Pickering were found guilty of high treason and condemned to be hanged, drawn and quartered. The execution was postponed for a month by royal order because Charles II never believed that the Jesuits were involved in a plot against him. Oates produced more unreliable witnesses and the king allowed the executions to take place out of fear for popular anger.

Ireland and Grove were taken to Tyburn on Jan. 24, 1679. The people of London pelted them with stones and insults as they were dragged to the gallows. They were hanged until dead, and then cut down so their bodies could be drawn and quartered.