The Gunpowder Plotters Die, Part One 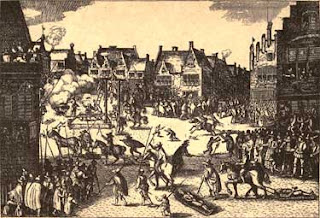 Sir Everard Digby, Robert Wintour, John Grant, and Thomas Bates, four of the surviving Gunpowder Plotters were executed in St. Paul's Churchyard on January 30, 1606. They and the other conspirators had been tried on January 27th in Westminster Hall.

According to this site:

Digby, Robert Wintour, John Grant and Thomas Bates were the first scheduled to be executed. Their executions took place at St. Paul's Churchyard on 30 January 1606. Digby was the first to mount the scaffold, which he did unrepentant. In his speech he had claimed that he 'could not condemn himself of any offense to God' in his motives of the 'ending of the persecution of the Catholics, the good of souls, and the cause of religion', although he freely admitted to offending the laws of the realm, for which he was willing to suffer death, and 'thought nothing too much to suffer for those respects which had moved him to that enterprise.'.

He refused to pray with the preachers, and called on the Catholics in the crowd to pray with him, whereby he "fell to his prayers with such devotion as much moved all the beholders".

He then saluted each nobleman and gentlemen upon the scaffold, in 'so friendly and cheerful manner' that they later said that he seemed 'so free from fear of death' that he could have been taking his leave of them as if he was just going from the Court or out of the city.

Digby was hung only a very short time, and was undoubtedly alive when he went to the quartering block and was disembowelled. Cecil's cousin, Sir Francis Bacon told the story that when the executioner plucked out his heart, and held it up saying, as was the custom "Here is the heart of a traitor", Digby managed to summon up the strength to respond "Thou liest".

Digby, perhaps given his youth and earlier popularity, made quite an impression, as recounted by Gerard:

"He was so much and so generally lamented, and is so much esteemed and praised by all sorts in England, both Catholics and others, although neither side do or can approve this last outrageous and exorbitant attempt...".

More about the other conspirators tomorrow.
Posted by Stephanie A. Mann at 2:36 AM

Email ThisBlogThis!Share to TwitterShare to FacebookShare to Pinterest
Labels: Executions, James Ist, Jesuits, the Fifth of November, the Gunpowder Plot