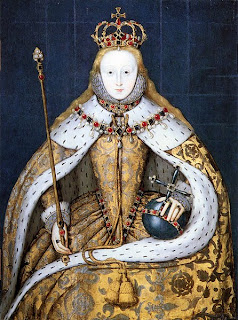 On January 15, 1559 Elizabeth Tudor was crowned and anointed Queen of England and Ireland in Westminster Abbey with a ceremony based on that developed for her half-sister Mary Tudor five years or so earlier. There are reports that she left the sanctuary area when the Bishop of Carlisle elevated the Sacred Host and that she did not receive Holy Communion. She was only 25 years old--after the succession of a boy king, too young (legally) to reign, and of a middle aged woman, perhaps too old to reign, her youth must have been very refreshing. Her subjects anticipated her marriage.

Her first Parliament would establish the Via Media of the Church of England while the Convocation of Bishops as constituted by the late Reginald Cardinal Pole, Archbishop of Canterbury, almost to the man, refused to swear the Oaths of Supremacy and Uniformity demanded by it. Elizabeth appointed Matthew Parker, who had been one of her mother's chaplains, as her Archbishop of Canterbury--she was, after all, Supreme Governor of the Church, as determined by Parliament. The bishops, priests and officials at the universities of Oxford and Cambridge who refused to take her oaths and follow his leadership would be deposed from their positions, exiled or imprisoned.

Today, on January 15, 2012, the Ordinariate of Our Lady of Walsingham will celebrate its first year: "Monsignor Newton will preside at this commemoration celebration, which has been organised by Fr Christopher Pearson and the Marylebone Ordinariate Group, and to which all are invited.The music for the event has been chosen to reflect some of the familiar repertoire of the Anglican Choral Tradition and will include works by Sir Charles Hubert Hastings Parry, Sir Charles Villiers Stanford, Henry Balfour Gardiner and Sir Edward Elgar." Last year on this date, the Vatican announced the formation of this Ordinariate for groups of Anglicans in England, including entire congregations. 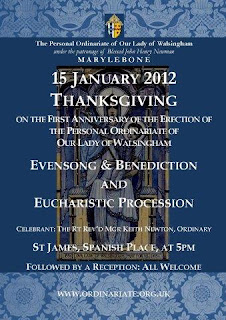 The visitor to St James's Church is often puzzled to know why a church which stands in George Street, W1, should have derived a kind of secondary title from a street called Spanish Place which can be found opposite the Presbytery door. The explanation is that St James's, Spanish Place, like so many of the older parishes in the Westminster diocese, can trace its origin to the penal times and to the benefactions of a friendly Catholic embassy. And this is perhaps the reason why, despite the magnificence of the church, there is within an atmosphere that breathes our Catholic past.

In the reign of Elizabeth I the Bishops of Ely let their palace and chapel in Ely Place to the Spanish Ambassador, and until the reign of Charles I it was occupied by the representative of the Court of Spain. During this period the chapel was freely used by English Catholics and became a place of sanctuary for them.

A rather fascinating juxtaposition of events--and even location, eh?
Posted by Stephanie A. Mann at 2:04 AM

Email ThisBlogThis!Share to TwitterShare to FacebookShare to Pinterest
Labels: Anglicanorum Coetibus, Elizabeth I, Our Lady of Walsingham, Sunday Series