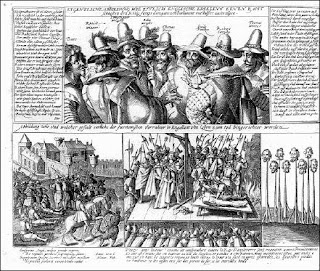 On January 31, 1606, the second group of Gunpowder Plot conspirators were executed: Thomas Wintour, Ambrose Rookwood, Robert Keyes, and Guy Fawkes. From the site I quoted yesterday:

On Friday, 31 January 1606, Fawkes, Thomas Wintour, Ambrose Rookwood and Robert Keyes were taken to the Old Palace Yard at Westminster and hanged, drawn and quartered "in the very place which they had planned to demolish in order to hammer home the message of their wickedness". Thomas Wintour was followed by Rookwood and then by Keyes. Guido, the "romantic caped figure of such evil villainy" came last. A contemporary wrote:

"Last of all came the great devil of all, Guy Fawkes, alias Johnson, who should have put fire to the powder. His body being weak with the torture and sickness he was scarce able to go up the ladder, yet with much ado, by the help of the hangman, went high enough to break his neck by the fall. He made no speech, but with his crosses and idle ceremonies made his end upon the gallows and the block, to the great joy of all the beholders that the land was ended of so wicked a villainy".

Jardine says, "according to the accounts of him, he is not to be regarded as a mercenary ruffian, ready for hire to do any deed of blood; but as a zealot, misled by misguided fanaticism, who was, however, by no means destitute of piety or humanity".

Another of the condemned, Ambrose Rookwood, also escaped the agony of evisceration:

While being dragged to his execution, he asked to be told when they were passing his house in the Strand so he could have one last look at his beloved wife. He cried to Elizabeth 'pray for me, pray for me'. She replied "I will, and be of good courage. Offer thyself wholly to God. I, for my part, do as freely restore thee to God as He gave thee unto me".

At the scaffold, he made a speech where he freely confessed his sin, and asked God to bless the King and his family, that they might 'live long to reign in peace and happiness over this Kingdom', and beseeched God to make the King a Catholic. "The onlookers could scarcely restrain their tears since he had been well known and loved for his exemplary behaviour while he lived". This speech earned him his mercy, as he was hanged until he was almost dead.
Posted by Stephanie A. Mann at 2:11 AM