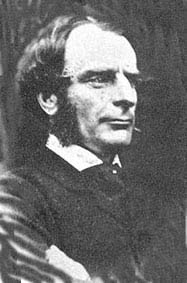 Charles Kingsley died on January 23, 1875. Clergyman, proponent of "muscular Christianity", novelist (Westward Ho! and Water Babies), and Regius Professor of Modern History at the University of Cambridge, he also provoked Father John Henry Newman, Oratorian to write his Apologia pro Vita Sua in response to Kingsley's attacks on Newman's honesty--and that of all Catholic priests.

Kingsley had reviewed Froude's History of England in Macmillans Magazine and commented: "truth, for its own sake had never been a virtue with the Roman clergy . . . [and] Father Newman informs us that it need not, and on the whole ought not to be; that cunning is the weapon which Heaven has given to the saints wherewith to withstand the brute male force of the wicked world which marries and is given in marriage."
Although Newman contacted Kingsley asking him to point out where and when he had ever said such a thing, Kingsley ignored that question and just offered an apology.
An exchange of letters ensued which resulted in Newman's pamphlet Mr. Kingsley and Dr. Newman: A Correspondence on the Question Whether Dr. Newman Teaches That Truth is No Virtue. Instead of letting the matter drop, Kingsley flailed out in his own pamphlet: "What, Then, Does Dr. Newman Mean?" A Reply to a Pamphlet Lately Published by Dr. Newman. In his pamphlet Kingsley foolishly broadened his charge: not only had Newman made a statement he denied having made and which Kingsley was unable to locate, Newman had also lived a dishonest life. Throughout that text, Kingsley presents one of his main themes (found for instance in his novel Westward, Ho!): that there is something un-English about Catholicism, that the latter is foreign, deceptive, and manipulative--and that somehow becoming Catholic (Romish, Romanist are Kingsley's perferred terms) Newman had betrayed his country, wasted his Oxford education, and ignored the virtues of his English heritage.
Of course the Apologia pro Vita Sua put the lie to that charge, vindicated Newman completely, and made Kingsley look rather ridiculous. Kingsley was not sophisticated enough to face Newman's argument and persona; I remember reading that their verbal duel was like a country bumpkin challenging a trained swordsman, the former armed with a stick, the latter with a fine rapier. By giving Newman the occasion to write about his religious opinions from his youth to his conversion to Catholicism to demonstrate his honesty, Kingsley also gave Newman the opportunity to convince Anglicans who had remained in the Oxford Movement that he had been sincere in his efforts in that cause and to persuade Catholics that he was truly a Catholic, not with one foot in Canterbury and the other in Rome.
Posted by Stephanie A. Mann at 2:03 AM