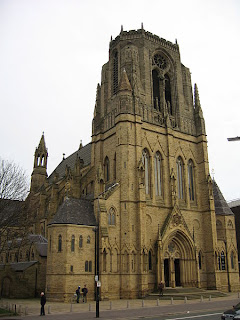 The Feast of the Holy Name of Jesus is celebrated on the Tuesday before Epiphany this week, on January 3rd. In honor of the feast, today's Sunday Shrine series post links to the "RC" Church of the Holy Name of Jesus in Manchester, England. According to the Wikipedia article on this church, it was founded by Jesuits in the late 19th century, fell into disuse, and has been revived by an Oratory of St. Philip Neri in formation. Mass is celebrated ad orientem (with the priest facing the high altar, toward the east and in the same direction as the congregation) with regular celebrations of the Extraordinary Form of the Latin Rite (aka the Traditional Latin Mass).

In the sixteenth century the Spanish saint, Ignatius of Loyola founded an order called the Society of Jesus or Jesuits, who were a powerful force for the reform of the Catholic Church. They often built large churches in cities where their influence could be effective through preaching, the confessional and parochial work. They were invited to come to Manchester by the Bishop of Salford, Rt. Rev. William Turner in the late 1860’s. The foundation stone of the Holy Name was laid in 1869 and the church opened on 15th October, 1871.
The architect was a favourite of the Jesuits, Joseph Aloysius Hansom, the inventor of the cab that bears his name. The church he designed is 14th century French Gothic in style, but the plan is typical of a Jesuit city church – a broad nave, prominent pulpit and a short sanctuary with the altar near and in full view of the congregation. It is 186ft. from east to west, 112ft. from north to south and 100ft. from the floor to the inside of the vault.

The structure is brick faced inside with moulded terracotta and outside with Warwick Bridge stone. Sir Nikolaus Pevsner in his introduction to the ‘South Lancashire’ volume of his ‘Buildings of England’ series wrote that the Holy Name ‘is a design of the very highest quality and of an originality nowhere demonstrative…….Hansom never again did so marvellous a church.’

The Feast of the Holy Name of Jesus celebrates His naming at His circumcision--and was celebrated on various dates after Christmas by different religious orders or dioceses until extended to the universal Church in 1721. St. Bernardine of Siena and St. John of Capistrano had been the great promoters of the devotion, symbolised by the monogram IHS. In 1970 the feast was removed from the universal Roman calendar and then restored by Pope John Paul II in 2000.

"At the name of Jesus every knee should bend, of those in heaven and on earth, and under the earth, and every tongue confess that Jesus Christ is Lord, to the glory of God the Father" (Phil 2:10-11). Note that when that reading is proclaimed in the Extraordinary Form of the Latin Rite, we DO bend the knee during that verse!
Posted by Stephanie A. Mann at 2:26 AM