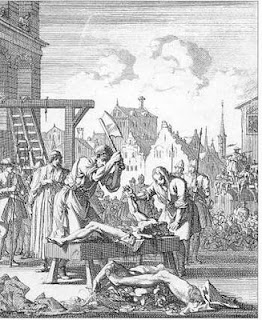 The facts:
~Blessed Edward Stransham, priest and martyr--A native of Oxford, born about 1554, earning his BA from St. John's College in 1575-76. Then he went to Douai in 1577 and Reims in 1578. Because he was ill he returned to England to recuperate; then went back to Reims in 1579; ordained in 1580. In 1581 he returned to England as a missionary priest, but was still suffering from consumption; he left England in 1583, bringing 12 Oxford converts with him to Reims. After a stay in Paris, he returned to England and was arrested while saying Mass in London in 1585 and executed at Tyburn on January 21, 1586.
~Blessed Nicholas Wheeler (or Woodfen), priest and martyr--Born at Leominster in 1550, he studied for the priesthood in Reims, after ordination he returned to England with Edward Stransham, and was executed with him at Tyburn in 1586. (He is honored at this church in Herefordshire.)

~Saint Alban Roe, OSB, priest and martyr--Born in Suffolk in 1583, after his conversion to Catholicism, he became a Benedictine and was ordained; he was arrested several times during his ministry, and exiled and imprisoned for seventeen years. He was executed at Tyburn in 1642.
~Blessed Thomas Green (Reynolds), priest and martyr--Born under the name Green, he trained at Rheims, Valladolid and Seville; exiled from England once, he returned and spent fourteen years imprisoned until his execution at Tyburn in 1642 at the age of 80.

The significance:
In 1586, Blessed William Freeman witnessed the executions of Stransham and Wheeler. He became a Catholic, went to Reims, was ordained and returned to England as a missionary priest. He was hung, drawn, and quartered for that crime on 13 August 1595in Warwick, after spending some time in Stratford-on-Avon.

Notice, however, that the time Fathers Stransham and Wheeler spent in England was relatively short. Although Stransham traveled back and forth between England and the Continent because of his health (how poorly he must have fared in prison while waiting trial and execution!), he and Wheeler received no second chances once finally captured--during some periods of Elizabeth I's reign, that was the common practice: capture, torture (if some plot was suspected), trial, execution.

St. Alban Roe and Blessed Thomas Green, ministering during the Stuart dynasty, however, received different treatment. They were captured, imprisoned, and exiled, sent back to the Continent--then they returned. Their long final imprisonments were spent in relative "freedom". St. Alban Roe was allowed to leave his cell in the Fleet prison, minister to Catholics, and return at night for lock-up. In 1641 he was transferred to close confinement within the strict Newgate prison and was finally tried in 1642 and found guilty of treason under the statute 27 Eliz c.2 for being a priest. [The authorities really didn't know what to do with him and at trial Roe perplexed the judge so much that he suspended his sentence of execution!] Just before his death, Alban asked the sheriff if his life would be spared if he renounced his Catholic religion and became an Anglican. The sheriff swore he would be spared if he did. Alban then said to all: “See, then, what the crime is for which I am to die, and whether my religion be not my only treason... I wish I had a thousand lives; then would I sacrifice them all for so worthy a cause.” More about him here, on the website of Ampleforth Abbey.

His companion, Blessed Thomas Reynolds (Green) had also been exiled in 1606, during the reign of James I--after the Gunpowder Plot!--but had returned to England to serve Catholics until he was arrested in 1628. He spent fourteen years in prison before his trial and execution. Why the long prison sentences, the relative freedom, the delay in trial and execution? Because Charles I was reigning without Parliament! "When he finally had to recall Parliament and the Long Parliament convened, however, the hangings began again in earnest (20 between 1641 and 1646 including Fr. Alban [and Fr. Reynolds])" Ampleforth Abbey notes.

The situation: (a little Ignatian method here, as I shared yesterday on the Son Rise Morning Show): think of the cold these men endured those January mornings. After all dangers of their missionary efforts, the discomforts of imprisonment, and the anticipation of the horrendously painful and humiliating death they were about to undergo, they were shivering with cold. The hurdles they were tied to, on their backs, bumped and jostled on frozen ground. St. John Roberts, executed in December of 1610, managed to joke about the cold: when someone said he should be wearing a cap, he asked "are you afraid I'll catch a cold?"; when he arrived at the scaffold he saw the fire (which would actually be used to burn his guts) and said "I see you have prepared a hot breakfast for us!" It's clear that the demeanor and steadiness of these four men moved the crowds to empathy--and at least in one case we know of, conversion.

The stories of the English Catholic martyrs--like all the Church's martyrs from Apostolic times until today--never cease to inspire!

BTW, I will post a link to the podcast of my interview yesterday on this facebook page dedicated to The Catholic English Martyrs when it is available.
Posted by Stephanie A. Mann at 2:15 AM